von Palina Kedem
Our poll in the Arab public expects 60% voter turnout, great public confidence (91%) in the impact of the Joint List in the next Knesset, and a high level of opposition to the "Deal of the Century".
27. Februar 2020 Bestellinformationen

The expected turnout of Arab citizens in the upcoming 23rd Knesset Elections is 60%, a similar voting rate as the 22nd Knesset elections (59.2%).

The Joint List is expected to win the support of a large majority in the Arab public, 75.2%. Jewish parties receive the support of 22.3% of those surveyed.

A majority of the Arab public (59.5%) believes that the Joint List represents its interest to a large extent. An even larger majority (almost 91%) believes that the Joint List will have an impact in the next Knesset in raising development budgets for Arab communities, increasing awareness of Arab society's problems, preventing anti-Arab legislation, and cooperating with the government in return for its commitment to solve Arab society's problems. However, only 34.3% of the Arab public are optimistic about the expected results of the elections.

The most qualified candidate for Prime Minister in the eyes of the Arab public is Ahmad Tibi (23.6%), followed by Benny Gantz (12.0%), Ayman Odeh (6.9%), and Amir Peretz (6.1%). Benjamin Netanyahu receives a small support, 2.2%. On the other hand, 12.4% of those surveyed believe that there is no qualified candidate for this position today.

A quarter of the Arab public is not familiar with the "Deal of the Century" program. Of the opinion holders, 79% oppose the vision presented in the plan while only 21% regard it favorably.

The most important issues for the Arab public are poverty and employment, the problem of violence and crime, planning and construction, education, struggle to amend the Nation State Law, and the Palestinian issue. 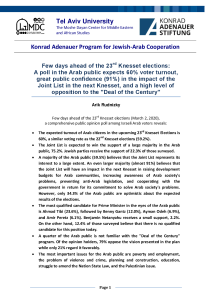 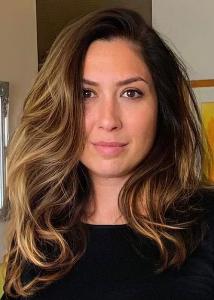 Bürgerschaftswahl in Hamburg am 23. Februar 2020