The city of Basra is largely recognized as the economic capital of Iraq, it represents the country’s main harbor and some of its largest oil fields are located in the province – yet it has been the center of massive protests against unemployment in 2018. The uprisings were fueled by the anger and disappointment many locals felt, being confronted with the lack of job opportunities. These sentiments were mainly channeled towards the government and the international oil companies active in the region. This paper aims to analyze the relationship between oil and unemployment as a crucial factor for both fueling the protests and shaping the government’s response.
28. Juni 2019 Bestellinformationen 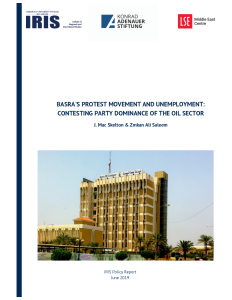