Measuring the Attitudes of the Arab Citizens in Israel

We are pleased to present the findings of our public opinion poll conducted in the summer of 2017, which measures the attitudes of the Arab public in Israel on issues of citizenship, identity and political participation. The study was conducted within the framework of activities of the Konrad Adenauer Program for Jewish-Arab Cooperation at Tel Aviv University.
28. Dezember 2017 Bestellinformationen

The findings of the study show that the concrete issues facing the daily life of Israel’s Arab citizenry are on its main agenda, while they are less preoccupied with external issues such as the peace process or issues related to the Palestinian territories. The concerns of the majority of the Arab citizens (60.2% in total) are focused on three areas: the problem of spreading violence in Arab communities, manifestations of racism on the part of Jewish citizens towards Arab citizens, and difficulties in the areas of the economy and employment.

This agenda has changed considerably over the last two decades. In the 1990s, the Arab citizens placed the progress of Israel's peace process with the Palestinians together with the advancement of civic equality within the country (this spirit is captured in the decade’s popular slogan: “Peace and Equality”). Today, the agenda of the Arab citizens has become limited to a statement of “equality and security (personal, occupational) now, peace later.”

These findings are consistent with the findings of our Poll of Public Opinion that was conducted in early 2015, on the eve of the elections for the 20th Knesset. The poll’s participants expressed their views on the role of the Joint List on the day after the elections. In response to the question "What should be on the agenda of the Arab citizens after the elections?" the respondents ranked first the internal problems of Arab society and second, the government's policy toward the Arab population. Negotiations between Israel and the Palestinians ranked third.

The new findings from the current survey show a strengthening tendency toward integration into politics and the desire for full political participation, stemming from the strengthening of Israeli civic identity, but without relinquishing the Arab-Palestinian national and cultural identity.

Most Arab citizens (60%) relate positively to Israeli citizenship and to current living conditions in Israel. In contrast, a considerable portion - at rates ranging from one-quarter to one-third of the respondents (by varying demographic categories) - holds very critical views on these matters. Basic demographic variables such as age, religious affiliation, and level of education have a decisive influence on the personal position of Arab citizens. Young people and those with a low level of education tend to adopt a suspicious and critical attitude toward the situation in the country, toward state institutions and toward government policy. On the other hand, the survey found a direct correlation between age and level of education and the adoption of positive stances and feelings. It is made apparent that the integration into the education and labor markets of the working-age groups (between 23 to 59 years of age, as defined in the survey) has additional effects. For example, the higher the level of education of a respondent, the more he or she tended to report feelings of personal freedom, stability, and even a sense of belonging to the State of Israel. It should be noted, however, that in certain areas, especially on the issue of equality, those with higher education are more critical of the situation in the country. There is no doubt that in addition to their assessment of the standard of living in Israel and the advantages of Israeli citizenship, they tend to judge from a deeper perspective the essence of equality towards the Arab citizens of Israel.

Arab citizens attribute importance to their participation in Israeli politics, even if it is divided on whether an Arab party should join the government (in the right circumstances), or if to support to the government from outside a coalition, or to refuse to support it under any conditions. The fact that having a family member elected to an official position – as a Knesset member or a minister – would be a source of pride among an overwhelming majority of Arab citizens reinforces this conclusion. Nevertheless, it appears that the Arabs explicitly differentiate roles in the parliamentary field. The role of the prime minister is not appealing to Arab citizens and achieving it does not seem realistic in their eyes, apparently because of the full identification of this role with the Zionist character of the state. This finding is supported by the words of the participants in the focus groups: Israeli citizenship is welcomed as long as it does not interfere with their sense of national belonging to the Arab or Palestinian nations.

The positions of the participants in the focus groups reflect the strength of Palestinian-Arab identity among Arab citizens and the fact that they do not see a contradiction between Palestinian-Arab national identity and Israeli civic identity. A comparison of views expressed in the focus groups with the general results of the survey points to differences between collective positions and memory and individual feelings and attitudes. The collective position presented in the focus group discussions finds expression in the public sphere and emphasizes the Palestinian national identity. Conversely, the responses of the survey participants reveal individual attitudes that assign a broader (albeit secondary, identity) dimension to the component of Israeli civic identity. 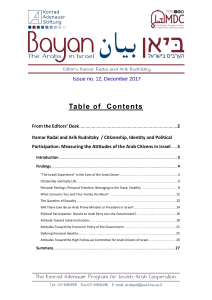