In the light of decentralization, the Middle East Research Institute (MERI) analyses the relentless and ongoing security and economic crisis plaguing Iraq.

Sectarian, ethnic, and tribal interests have resulted in polarisation, fragmentation and militarisation of several Iraqi communities. Due to extensive international security, political and financial interventions, Iraq has been relatively stabilized with its territorial integrity intact, at least for the moment. However, this international support alone cannot bring about legitimacy and stability in the long term. Nineveh province remains as one of the regions where major security and administrative crises remain unaddressed. Despite the Iraqi Parliament initiative from 2008 to stipulate the devolution of some legislative and executive power, it failed to tackle the local governments’ structural and functional characteristics that are contributing to Iraq’s fragility and vulnerability. In an effort to identify those characteristics and address the challenges arising from them, this publication aims at determining how to better institutionalise decentralisation and power devolution from Baghdad to the provinces and from provinces to districts and sub-districts.
22. Mai 2020 Bestellinformationen

Please find the Arabic version of the publication here. 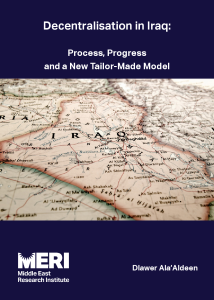