Ungku Aziz Centre for Development Studies - University of Malaya investigates the structural impediments that have hindered the growth of the agricultural sector in Malaysia.

This report addresses issues in Malaysia’s public institutional architecture pertaining to agriculture and agro-based SMEs. It investigates the inability of numerous policies to increase Malaysia’s agricultural production and food security. This project thoroughly scrutinizes the roadblocks in delivering policies effectively to farmers and livestock owners as current and past agricultural policies lack effective implementation due to structural issues.
18. Januar 2023 Bestellinformationen

Although Malaysia’s food security level is high by international standards, the import of food has been consistently increasing. This suggests a serious problem with the planning and implementation of policies related to the agriculture sector This is also evident in Malaysia’s low productivity levels compared to high-income countries. Government intervention and investment in agriculture can be categorised into two areas. The first is investment in industrial crops such as palm oil and rubber and the other is in agro-food products such as fruits and vegetables. Malaysia’s focus on agriculture can be traced to the 1970s, when the government, having adopted a highly interventionist approach to economic development, increased investments, implemented policies, and introduced institutional reforms to promote palm oil cultivation. Later, agro-food-based policies were actively promulgated. For example, when the National Agro-Food Policy 2011-2020 (NAP) was instituted, its focus was on food security by enhancing productive capacity in the agro-food sector. However, a decade later, the improvements envisaged by the NAP have not been achieved, with the non-rice agricultural food sub-sector in particular requiring further attention due to low performance. Despite having in place a well-constructed public infrastructure and numerous mechanisms to channel support to agricultural SMEs, the public delivery system has been in decline for some time. This indicates the need for the government to review its institutional infrastructure, including to revamp institutional bottlenecks that hamper production of food and the creation of domestic and transnational supply chains.

This project investigates the structural impediments that have hindered the growth of the agricultural sector in Malaysia. Focus group discussions (FGDs) and interviews were conducted in 2021-2022 in four states of Malaysia: Kelantan, Terengganu, Sabah, and Sarawak. This study involved three different groups of informants – public agencies, SMEs, and the farmers/communities. Each group was selected using purposeful sampling with three characteristics to choose from as a study informant. First, we mapped the policy promulgation landscape, identifying ministries, departments, and statutory bodies that are responsible for overseeing the sectors considered. We also investigated specific federal and state-level policies in place to promote food security and then evaluated if they overlapped in terms of implementation and target groups. The promulgation state-level agriculture policies was greatly influenced by the direction of national agriculture policies. Second, we analysed the policy implementation framework, as well as impact assessments, to determine if agencies have adequate capacity to implement policies. We found evidence of a patronage system where political ties between government organisations, SMEs, and farmers are rather significant. Third, we reviewed the policy outcomes on rural economies, including assessing how federal and state level policies were implemented in terms of decision-making processes, budget allocation, and overall management of a policy. Finally, in the fourth stage, this project attempted to understand the scope of improvement and provide key lessons.

Land is the main resource in agricultural development, so the state government must dare to zone agricultural land for food-based production without any interference from other development activities. The nature of the linkages between public institutions and SMEs that emerge from these policies can be characterized as dependent, leading to poor food production levels. There is an evident lack of coordination in the implementation of policies by government agencies, one not seen in the social market economy where there is much emphasis on ensuring state capacity to create a ‘responsive state’ capable of instituting an effective public delivery system. Finally, we analyse the scope of improvements and some key lessons that Malaysia needs to implement, including revamping piecemeal and disjointed policies and replacing them with one holistic policy.

Data from the ground showed major holdbacks to the expansion of local food production include problems to expand land ownership to increase output, the absence of an effective marketing system to reach consumers, an inability to control price of inputs and outputs, and poor training to enhance production capacity. Poor coordination between federal agencies and between federal and state agencies severely hamper implementation of policies. One strategy that could provide a remedy to these problems is the creation of a one-stop (publicly managed) centre for producers, particularly small and mid-sized producers, to market their products locally and globally, which also creates new marketing opportunities for rural food producers, regulates farm input and output prices, and provides training for farmers. 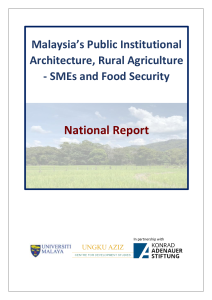 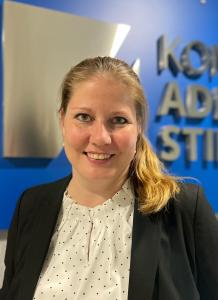