NDCs: What is there for Latin American big cities?

The key objective was “to help both national governments as well as selected city governments in Latin America to strengthen the dialogue in order to align the national NDC with existing city government plans and initiatives on climate change, which may have synergies with each other”.
16. Mai 2019 Bestellinformationen

The exercise was carried out in four countries and their respective main cities. The successful outcome of the first phase and the continued interest
in an effective implementation of the Paris Agreement worldwide encouraged expanding it to other countries in Latin America – which was the objective of the Project’s Second Phase.

A quick preliminary analysis indicated that only a very limited number of countries had both an NDC with clear targets as well as a capital city
with its own climate plan. At the same time, it was observed that the adaptation agenda has been gaining weight in the post-Paris Agreement
negotiations, so it was decided to do an exercise similar to mitigation – comparing national and city level plans – in the case of adaptation. The
challenge was to find countries in Latin America where both national and city governments had developed climate adaptation plans.

The second phase of this project consists of an analysis comparing national and city climate plans, with four countries focusing on the mitigation agenda and 4 other countries on the adaptation agenda. They are:

Two key features distinguish the first from the second phase. Apart from the inclusion of the adaptation agenda and the participation of eight rather than four countries and cities, (i) it has been agreed that the second phase analyses would be less in-depth and would not involve field discussions, although one closing workshop was also programmed and took place in October 2018 in Santiago de Chile, with the participation of most countries and cities; (ii) the substantive analyses consisted of desk-reviews only, and were prepared over a period of two months only. The Second Phase Report was also expected to be much shorter than the first one.

The challenge is how can national and city governments best coordinate their efforts to reduce emissions, fulfilling countries’ commitments to the Paris Agreement, minimizing costs, identifying opportunities and ensuring the ‘right’ institutional coordination framework. 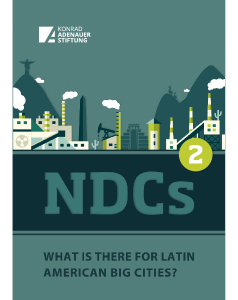