The Exploitation of Natural Resources in the Financing of Terrorism

The Case of Syria and Iraq

As terrorist groups proliferate worldwide, a worrisome phenomenon is being increasingly observed: the tendency of terrorist actors to exploit natural resources in order to finance their activities, given the advantages that this source of revenue offers vis-à-vis the available alternatives. Confronted with this phenomenon, it becomes imperative to advance the discussion on terrorists' exploitation of natural resources in the framework of a broader effort to counter the financing of terrorism. This paper has thus a three-fold aim: shed light on the under-investigated phenomenon of how terrorism finances itself through the illegal exploitation of natural resources, present the answer to the problem that has been elaborated within the legal system of the United Nations (UN), propose additional measures that can contribute to countering the exploitation of natural resources by terrorist actors. The publication is available in Arabic and English.
6. März 2020 Bestellinformationen 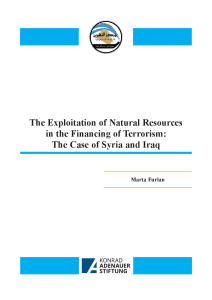