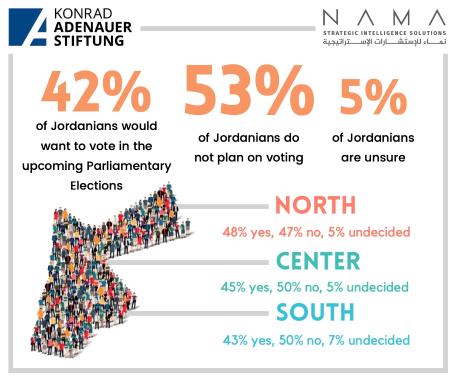 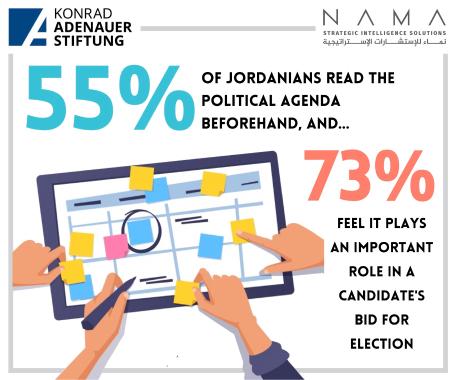 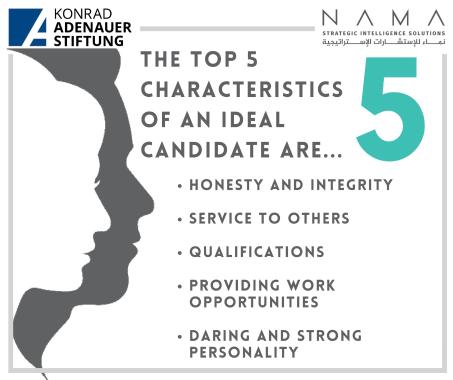 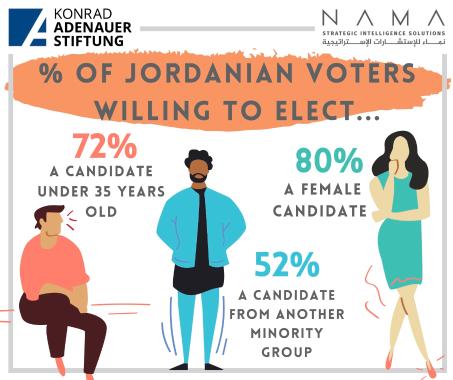 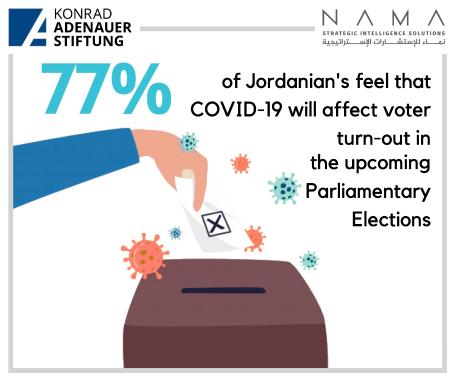 On the 10th of November, Jordan will embark on its 2020 Parliamentary Elections. The November Parliamentary Elections will complete the parliamentary cycle, which is set to be the first cycle to complete four years since the start of the past decade. In light of the current conditions, which play an influential role in both the elections and the events leading up to that, including candidates’ campaigns, NAMA Strategic Intelligence Solutions has conducted a nationally representative survey, in collaboration with Konrad-Adenauer-Stiftung, to explore Jordanians’ perceptions towards the elections. The survey was conducted during the month of September, with an overall sample of 3,003 adult Jordanians, utilizing the survey tool designed by KAS and NAMA, cooperatively. The survey was comprised of 6 main sections: participation, political money, electoral knowledge, voting behavior, personal opinions, and media.

The survey produced a number of insightful results. In relation to the upcoming elections, 85% of Jordanians indicated that they are aware that the Parliamentary Elections will take place next November, yet 42% illustrated that they would either vote for sure or would probably vote, compared to 46% who stated they would definitely not vote.

Of the main reasons Jordanians would disengage from the elections, the absence of worthy candidates (30.2%), lack of trust in the parliament (21.9%), and lack of conviction in the elections (18.8%) are most notable. As for the main reasons for voting, service provision, kinship and affinity, and a candidates’ strong personality to perform their duties were the most referenced. Additionally, qualities such as honesty, integrity, service provision, and qualifications were cited as the most important characteristics in a perfect candidate. Interestingly, the interviewed Jordanians with a higher education background where less inclined to go to vote than those with a lower education background. Whereas 32 percent of illiterate Jordanians declared that they would “vote for sure”, only 21 percent of Jordanians with a B.A. or higher degree did. Instead, 50 percent of the interviewed Jordanians with B.A. or higher degree said that they would “definitely not vote”. In the group with high school diploma this percentage came down to 46, below high school to 44 and and in the illiterate group to 41 percent.

Elections usually propel major discussion on what is referred to as “political money.” About 78% stated that political bribery exists in Jordan to a large extent (52.1%) or to a medium extent (25.9%). The results showed an interesting case when contrasting the prevalence of political bribery at the national level with the voting district level. 55.5% believe that political bribery exists in their voting districts to a large extent (31.5%) or to a medium extent (24%), about 23 percentage points lower than the national average. These two findings are also mirrored in the belief that a candidate’s financial status is the main determining factor for winning in the elections, a perception held by 70.6% of Jordanians. At the same time, 63.6% held that the absence of such financial wellbeing constitutes an obstacle for deserving candidates to run.

Looking at Jordanians’ knowledge of the electoral process, the results show that over 57% either know a little or do not know anything at all about the process. This may be explained by the changing electoral laws from one electoral cycle to another. Additionally, 66.5% of Jordanians do not know their electoral districts.

Looking at the overall conditions in Jordan, nearly 52% believe that things are going in the right direction, a result that has not been seen in Jordan for a number of years. This may be due to the current global pandemic of COVID-19, which stimulates a sense of safety and security on the personal and national levels, and that in turn tends to reflect positively on the perception of country direction. At the same time, economic conditions, corruption, and refugees remained the three most pressing challenges facing Jordan today, in addition to COVID-19, which is widely seen as a major obstacle to participating in the next elections, as stated by 76.5%.

In relation to political reform, Jordanians appear to be more in favor of democratic channels to achieve it with 43.4%, compared to 18.6% who indicated that such reform can only be achieved through protests, while 26.3% believe it can be a combination of both.