What brings foreign broadcasters to Africa?

Using the examples of China and Germany

In this paper we take a closer look at two global players: Germany with its programs for radio and TV through Deutsche Welle and one of the youngest actors on the world media stage: China, with the TV station CGTN, CRI radio, the news agency Xinhua and the newspaper China Daily, whose ap-pearance in Africa had been watched and analyzed closely.
19. Juli 2018 Bestellinformationen

If you think of international news and media, you may think of the BBC, one of the oldest players in this field. Since 1932 they have provided news not only for Great Britain, but for all commonwealth states. In 1939 the BBC launched its program in Afrikaans followed by Portuguese for Africa and Hausa, Swahili and French in the following years. Today the BBC offers a wide program range for the whole continent: it provides content for TV, radio and the internet in English, French, Hausa, Kinyarwanda, Kirundi, Somali, Kiswahili, Afaan Oromo, Amharic, Igbo, Pidgin, Tigrinya and Yoruba . And other countries have also reached out to the world. They are not only sending cor-respondents to report from abroad for an audience back home, but they produce content for the whole world. And the BBC is not alone; a lot of countries have entered the global media market. The big question is: why? What is the motivation behind this expansion?

Western media like the BBC and CNN have monopolized the global media market and they haven’t treated China very well – from a Chinese point of view. Reputation is a strong value in the People’s Republic of China and especially after the Olympic Games in 2008 in Beijing the Chinese government realized how important media is to gain a good reputation worldwide . The financial crisis of 2009 came at the right time for China. The western world was occupied with saving their banks and the budgets for western media were cut. The timing was right for new media to fill the gap and it fitted perfectly for China’s rising news agencies. Although the Xinhua News Agency opened its first bureaus in Africa in the 1970s, it took China more than 30 years to launch radio and TV stations in Africa. China Radio International (CRI) opened in 2006 in Nairobi, the TV station China Global Television Network (CGTN) - formerly known as CCTV - was launched in 2012 as well as the newspaper China Daily, both in Kenya’s capital Nairobi. This city is perfect for for-eign media to cover many of Africa’s countries, because it provides a good transport connection, it’s well-developed and one of the UN headquarters is based there. With this move, China followed the example of many international media companies.

By looking closer at the German and the Chinese broadcasters you can see that the motivation behind their global approach wasn’t very different in the beginning and somehow still isn’t. Both countries set out to establish a positive image of themselves in the world, primarily interested in the regions where they invest and export a lot. Both cover mostly stories which have a connection to the origin country and both have a wider view than local media. Please click on the PDF to read the full chronicle.

Maika Schmitt, the author of the research, was a research fellow with KAS Media Africa from March to May 2018. 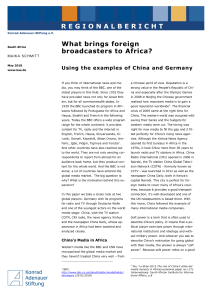