Deforestation is a worldwide phenomenon and it is depriving millions of people of forest goods and services that are crucial to food security, economic well-being and environmental health. Today with only 0.2 hectares of forest per person, the Asia-Pacific region is, per capita, the least forested region in the world. With the Potsdam Institute of Climate Impact Research, KAS RECAP conducts an expert workshop to discuss the current situation of deforestation in the context of climate change.
10. - 12. März 2019

Deforestation is a major component of greenhouse gas emissions.  Some sources estimate that forests could constitute roughly one third of the solution to achieve the Paris Agreement’s goal to keep global mean temperature rise within 1.5-2°C as compared to preindustrial levels.  Regrettably, success in slowing deforestation has been uneven across the world and is fluctuating over time.  The central goal of this [conference, workshop] is to elucidate the prerequisites for substantially reducing deforestation and forest degradation as well as to further afforestation.

Presently, three major sources of forest carbon finance exist: the voluntary market, the compliance market, and the intergovernmental market of UN REDD+ (Reducing Emissions from Deforestation and Forest Degradation in Developing Countries), yet the full potential of the market remains unrealized.  For example, ca. $ 2.7b of UN REDD+ pledges presently remain unspent.  Since reaching the aspirational goal of the Paris Agreement will require dedicated and ambitious efforts to reduce emissions to build carbon sinks, we broaden the geographic scope to look at the potential of and incentives for increasing net forest biomass around the world, esp. in forest-rich countries.  To incentivize slowing deforestation and to further afforestation, the following components merit elaboration: 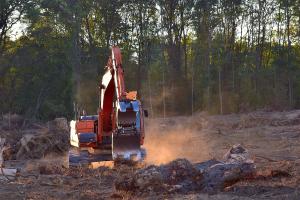