Europe in the Indo-Pacific - www.kas.de

The Indo-Pacific region is the new focus of global geopolitics. The emerging challenges from Chinese economic, diplomatic and military actions in the South China Sea, Indian Ocean, South Pacific and continent of Africa is a concern for all. Strategic groupings such as the Quad need additional partners to contain China. To protect global supply chains and trade routes, more like-minded countries need to enter the arena. The quadrilateral grouping of U.S, India, Australia and Japan is expected to get a further impetus with European allies cautiously joining the bandwagon. Major European players are now slowly formulating their strategies for the Indo-Pacific region. This September, Germany also joined the Indo-Pacific focussed club by announcing a set of policy guidelines for the region. As Germany currently holds the presidency of the European Union, its action can drive Europe’s strategy towards Indo-Pacific. In order to have a robust discussion on this topic, the Gateway House, Mumbai & the India Office of the Konrad-Adenauer-Stiftung (KAS) organised a Virtual Webcast on "Europe in the Indo-Pacific" on Tuesday, 15th December 2020.
16. Dezember 2020 Bestellinformationen 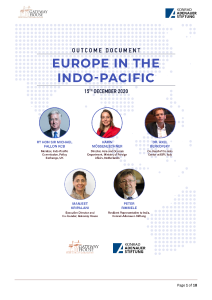