The Gateway House together with the India Office of Konrad-Adenauer-Stiftung organized a webinar on Indo-Pacific: New Geostrategic Reality on 30th June 2020.
3. Juli 2020 Bestellinformationen

Nomenclature:   The major threats to the rules-based order are magnified in the Indo-Pacific. The Indo-Pacific with its oceanic definition is self-limiting; it must now accommodate the complex geo-strategic issues beyond maritime interactions like land, and beyond Asia. The India-China border stand-off and the economic coercion of Australia by China exposed this limitation. It is necessary to create and operationalize a common framework that focuses on a rules-based order and includes co-operation across multi-domain security, trade, infrastructure and technology.

Of these, ‘inclusivity’ provokes the most differences, as it specifically refers to China. Being ‘inclusive’ makes the Indo-Pacific more palatable to regional powers but is divergent from the US definition of Indo-Pacific. In light of recent Chinese aggressions, both India and Japan, the foremost champions of an inclusive Indo-Pacific, may find Chinese inclusivity inconsequential.

Kinetic China:   In 2020, on the back of phenomenal economic growth and a significant upgrade to its military capabilities, China has abandoned Deng Xiaoping’s ‘hide our capacities and bide our time’ philosophy in exchange for accelerated assertiveness. The world is entering a decade of concern and uncertainty due to Chinese ambitions of establishing sovereignty beyond legitimate entitlements and settling territorial disputes using all elements of power at its disposal. The use of kinetic means where non-kinetic means fail, is the new geostrategic reality. Setting aside regional differences, nations in the Indo-Pacific and beyond must therefore come together on larger ideological convergences.

Trade and Treaties:   Adding an economic and infrastructure element to the Indo-Pacific framework is vital as many of the highly integrated economies in the region have deep trade ties with China. Most ASEAN nations have territorial disputes with China, but are also part of the RCEP. They will find it difficult to embrace the Indo-Pacific construct in its present form.

One of the prominent cornerstones of President Obama’s Pivot to Asia was greater economic integration with ASEAN and the wider Asia-Pacific rim. The withdrawal of the U.S. from TPP and India from RCEP has weakened the economic integration that is critical to the survival of   the many small, open and integrated-with-China economies in South East Asia. For them, decoupling from China will be difficult, as it will be even for the US and most of its allies which have significant trade relations with China. A gradual diversification is key to wean off the addiction to Chinese manufacturing.

EU and the Indo-Pacific:   Europe has yet to develop a consciousness about the Indo-Pacific as a geo-strategic reality. Like ASEAN, many nations within the EU, have deep economic engagements with China. Unlike ASEAN, the European nations and EU find comfort in the geographical distance that separates them from the complexities of the Indo-Pacific. The EU as a collective, and the member nations individually, have tried to balance economic imperatives with normative concerns.

But China’s Belt and Road Initiative (BRI), with its opacity and debt diplomacy, aims to divide the European nations. The spread of COVID-19 to Europe and beyond, and the geo-strategic implications of European businesses heavily reliant on Chinese supply chains, has now brought the concerns and complexities of the Indo-Pacific to their doorstep. The European nations and EU can no longer feel secure in the geographical separation of Chinese actions and must align with the QUAD to shape the future of Indo-Pacific.

India and the Indo-Pacific:   India will have to take leadership in the Indo-Pacific by deploying its soft power more effectively. In the short –term, India needs to improve relations with neighbors like Bangladesh, Nepal and Sri Lanka - this will significantly improve India’s appeal to similar powers in the Indo-Pacific, especially the ASEAN nations. India has found it difficult to forge FTAs but can emerge as a major economic player by becoming export-oriented regionally, growing GDP and generating employment.

Indo-Pacific Charter:   If China’s rise was actually a peaceful global event, the world would have been a different place. Through Xi Jinping’s BRI, China is no longer geographically restrained from meeting its geo-strategic and economic objectives. It is time for like-minded nations, working to a timeline and cutting across oceans and continents, to take a holistic and consensus-based approach in identifying and solving the challenges imposed by an assertive China.

A similar time-bound approach can be followed by the Indo-Pacific allies to create a broader framework enshrined in an Indo-Pacific Charter, to close the economic, diplomatic and strategic gaps for Chinese maneuverability. Some of the key elements of the charter must include trade, infrastructure and technology. 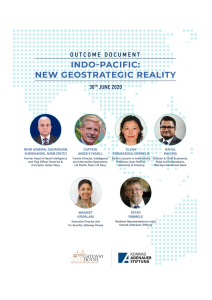