This is the event report for the very first Inter-Parliamentary Dialogue which was organised by the Konrad-Adenauer-Stiftung (KAS) Japan office between German and Japanese Members of Parliaments (MPs). The dialogue took place on 27 April 2021.
29. Mai 2021 Bestellinformationen

Germany and Japan share fundamental values. We have seen recent positive developments at the governmental level, such as the establishment of 2 plus 2 talks and Germany’s near-future dispatch of a frigate. It is KAS Japan's mission to foster dialogue between both German and Japanese Members of Parliaments (MPs) and helping develop mutual understanding. Germany, in its first Indo-Pacific Guidelines, sees Japan as an important partner in the region, especially in the field of security. On the other hand, Japan sees Germany as a leader in Europe and the international community.

A number of both countries’ MPs participated at the Inter-Parliamentary Dialogue held on 27 April 2021. In her opening remarks, Ms. Rabea Brauer (Konrad Adenauer Stiftung’s (KAS) Country Representative to Japan) emphasized the importance of communication between MPs from Germany and Japan on the bilateral front and that communication should not just be limited to diplomatic exchange, such as the 2 plus 2 talks. She also pointed out that the Inter-Parliamentary Dialogue is a unique format that KAS Japan was happy to organise. Ms. Brauer expressed her sincere gratitude for their participation, especially to the NATO Parliamentarian Assembly of Japan for their cooperation in organising the event.

The discussion focused on Germany’s policy shift, as represented by its Indo-Pacific Guidelines. Views on China as concurrently a systemic rival and a partner, the recent developments in bilateral cooperation that includes the 2 plus 2 Agreement on the Security of Information, as well as the German Frigate Bayern port calls in the region, which is a manifest signal to China, were discussed. The Japanese side called for sharing the sense of crisis, noting that China is developing long-range missiles that could reach Berlin and Washington D.C. Furthermore, the two sides expressed the need for further cooperation on areas such as the navy, cybersecurity, space, technology, and natural resources affairs as deterrents against China and Russia’s threats to the region and beyond. The two parties also discussed the Biden Administration and how each viewed their respective relationship vis-a-vis the US and the role of the G7 in tackling global challenges. Human rights diplomacy was also another point of discussion. The European Magnitsky Act and the Due Diligence Act were mentioned by the Japanese side. The discussion illustrated well Germany’s and Japan’s joint aim to overcome their respective troubled past and share common values that deepen the cooperation to safeguard the international order and multilateralism.

Ms. Brauer then wrapped up the session and called for the MPs’ cooperation in continuing this dialogue post- COVID-19.

A survey was sent out to all participants for feedback in developing further dialogue events. 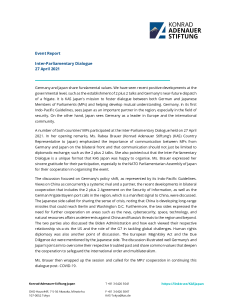