Madras Management Association (MMA), the India Office of the Konrad-Adenauer-Stiftung (KAS) and The Peninsula Foundation partnered in presenting a panel discussion through webinar, under the ‘Strategic Leadership’ series, on the theme, “The Galwan Clash: India's China Strategy and China's Great Game” on Friday, 26th June 2020. This virtual discussion can be viewed at: https://www.youtube.com/watch?v=0Pkn6X2v64w
29. Juni 2020 Bestellinformationen

Mr Peter Rimmele, Resident Representative to India of KAS delivered the introductory remarks in which he said that all the neighbours of China are uneasy in dealing with it and that China’s image has taken a beating after its less than transparent action in dealing with Covid-19. He said that in Europe, the thinking is to exclude China in major contracts and added that the US also exerts pressure on Europe in this direction.  However, he reckoned that China is an economic powerhouse and cannot be ignored. He highlighted the role of KAS in promoting democracy and international rule based order. “We need to work with our partners and find common solutions,” summed up Mr Peter Rimmele.

Air Marshal M Matheeswaran (Retd) moderated the Panel discussion. He pointed out that Chinese aggression has been going on steadily from 2010 onwards. While in 1980, both India and China were at the same level of growth, China’s GDP is 6 times that of India today, he stated and argued that India’s China strategy needs recalibration. He elicited from the panellists their views on the following Key Issues:

-What is the motive behind the recent escalation by China?

-Has there been an intelligence failure on India’s part?

-Has China been emboldened by its economic & military might?

-Between the US-China power play, has India become the fall guy?

-What prevents India from coming out with white papers on the subject?

-Why should India not insist on an agreed LAC and exchange maps?

-How can India enhance its naval and air power to combat China?

-Why don’t we look at Defence economy as a vital segment?

-How can we strengthen the manning of Indo-China border?

-What impact will the Galwan clash have on global governance?

Lt Gen Kamal Davar (Retd) pointed out that India shares 3488 km border with China and the Eastern sector has been a perennial problem area. He lamented that despite China’s superpower ambition and strategy, India has always been naïve in its dealings with China. ”Forget the sweet talks. Always be wary of the wily, crafty China,” he said and cautioned that the present situation is very serious. He indicated the likelihood of an intelligence failure as a cause. He remarked that the Indo-China border is now manned by ITBP and Special Frontier Force; instead, he advised a singular command to be effective. “We should follow ‘One Border; One Force’ policy” he insisted.

Ambassador G Parthasarathy (Retd) said that strategic containment of India is integral to China’s political thinking. He felt that India can hold China and no further territorial gains should be allowed. He pointed out that under the aggressive leadership of Xi Jinping, China has had a remarkable rise. “We have lost the plot after liberalisation and started importing heavily from China and gave them huge space even in vital sectors like Telecom,” he said. He suggested that we should build our comprehensive national power, strengthen maritime security, pursue diplomacy, leverage the Quad group and exert pressure on China, mobilising all anti-Chinese forces on a single platform. He underlined the importance of India’s strategic partnership with Germany.

Admiral Arun Prakash (Retd) insisted that India should have a clear China strategy. “We need to engage with China diplomatically and expose to the world about China not agreeing to any LAC,” he said. While China has vastly improved its military strength, technology and production, he regretted that for over 70 years, India has avoided making a national security strategy and our politicians are more focussed on the elections. “India should have a Minister for Defence Production,” he argued. He singled out the government’s Sagar Mala project as a good initiative but noted that not much progress has happened. He advised that strengthening maritime power not only augments our security but also provides huge employment opportunities.

Mr Mohan Guruswamy traced the genesis of the problem to China’s superiority complex and their natural dislike for India. “The whole world made China rich in the last 25 years, doing vast trade with them and shifting many production facilities to China,” he noted. Denouncing the jingoism against boycotting Chinese products, he drove home the ground reality that we now depend heavily on China. He said that this is a wake-up call to bring in land and labour reforms, so we can attract FDI and ramp up production facilities in India. He batted for long term military policies.

Group Captain R Vijayakumar (Retd), VSM moderated a Q&A session where questions from online viewers were taken up with the panellists, at the end of which he proposed the vote of thanks. 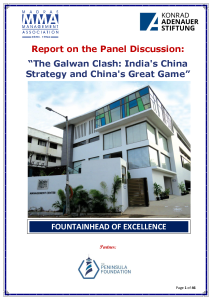