Madras Management Association (MMA) in collaboration with the India Office of the Konrad-Adenauer-Stiftung (KAS) presented a panel discussion on the theme, “Parliamentary Democracy in Covid Times” through webinar on 23 June 2020. ORF and NGPL were the event partners. This virtual discussion can be viewed at https://www.youtube.com/watch?v=49O2avTnaqk
25. Juni 2020 Bestellinformationen

Group Captain R Vijayakumar (Retd), ED, MMA welcomed the panellists and the participants. Mr Peter Rimmele, Resident Representative to India of KAS delivered the introductory remarks. “Parliament is the beating heart of the German democracy,” he said and underlined that Parliament can never be independent of the Executive. He cautioned against the general skepticism among the public about politicians. This, he pointed out, will lead to the growth of dictatorial Presidents and decline of democracy. He remarked that in Germany, there is no conflict between Legislature and the Executive.

Mr M R Madhavan – Co-Founder & President, PRS Legislative Research moderated the panel discussion. He highlighted the functions of Parliament and stressed that though Parliament’s monsoon session should commence in July, considering the extraordinary ground situation due to Covid-19 pandemic, the resultant economic crisis and other issues, Parliament should have been convened by now. He listed out many countries where Parliaments meet through digital platforms.  He elicited from the panellists their views on the following Key Issues about functioning of Parliament during Covid times:

What is the importance of Parliamentary Committee Meetings?

Many ordinances not related to the pandemic are passed now. Why should they not wait for Parliamentary discussions?

Should there be a law on the minimum number of working days for Parliament?

How do other democracies across the world are functioning during Covid?

If we manage to get the Parliament functioning using technology, will it be more effective? What will be the challenges?

Will virtual meetings be a handicap to some of the not-so-tech-savvy politicians? Will poor connectivity be an issue?

How can social distancing be ensured and threat of virus spread be minimised if Parliament were to be convened?

Is change of venue for conducting Parliamentary meetings and having online meetings allowed under Rule Book?

Why does the Government shy away from facing the Parliament?

Mr N K Premachandran, MP pointed out that there has been no meeting of Parliament since 27 March. It is a big gap, he reckoned, citing various highly critical issues like the pandemic management; NRIs stranded abroad, Indo-China and Indo-Nepal border issues, financial package announcement, etc. Avoiding Parliament, he argued, will lead to autocracy and warned that ‘absolute power corrupts absolutely.’ He suggested measures like video conferencing and meeting of Parliament on alternate days. Net connectivity in India and data security are big challenges but, he agreed, they can be managed.

Mr Naresh Gujral, MP was also of the strong opinion that Parliament should meet immediately, preferably in an indoor stadium in New Delhi to ensure physical distancing. He felt video conference for 543 members may not be feasible yet. He batted for increasing the number of working days in a week and extending the working hours of Parliament, to manage disruptions due to the pandemic. He brought out the importance of Parliamentary Committee Meetings. “Democracy cannot be kept in suspended animation,” was his fervent pitch.

Prof G Ramesh highlighted the high attendance of Canada Parliamentarians when they participated through virtual meetings. He was firm in saying that technology and connectivity should not be a major issue as we now do many mission critical jobs including online banking and online stock exchange operations, in a secured manner.  “When Parliament works, all government departments work in a frenzied way. It has to be seen how these support staff can be mobilised,” he said and cautioned that people above 60 should be taken care of.

Concluding the discussion on a very positive note, all the panellists agreed on the following:

Parliamentary standing committees should be convened without further delay; this can be done digitally and if possible, through physical meetings. Our Parliament is already technology enabled.

Parliament must be convened; the government has to deliberate on how it can be done and decide.

We can learn from how other Parliaments around the world function, their outcomes and challenges.

We have never seen a pandemic of this magnitude since independence. So we need to pool in and find a way out to see that Parliament functions and democracy in India is alive. Where there is a will, there is a way.

Group Captain R Vijayakumar (Retd), VSM moderated a Q&A session where questions from online viewers were taken up with the panellists, at the end of which he proposed the vote of thanks. 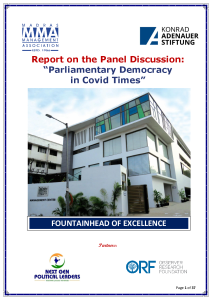