The Gateway House, Mumbai & the India Office of the Konrad-Adenauer-Stiftung (KAS) organised a Virtual Webcast on "QUAD OR SQUAD?" on 23rd July 2020. The webinar can be viewed at https://www.youtube.com/watch?v=X6DbFoBwYjY
27. Juli 2020 Bestellinformationen

Convergence in Divergence:   Chinese actions since the beginning of this year have accelerated major shifts in the global strategic outlook, that were seen only during the second World War and fall of the eastern bloc. Wary of a new-age cold-war rivalry between the US and China, the converging world view is to prevent a bipolar world order. by reforming the existing multilateral order, to create one that is connected by flexible and overlapping layers of co-operation within the Quad and beyond.

In the last two years the Quad has begun to crystallize into a like-minded grouping, whose members have worked to overcome significant internal hesitancies. The Quad must now move purposefully forward to build deeper institutional co-operation within before it can broaden to a formalized ‘Quad Plus’.

Quad Co-operation: defence, tech, trade:  Global domination used to be reflected through an arms race, then a space race. Now it is through a techno-digital race, with China aiming for supremacy, aided by its opaque civil-military fusion policy, the Quad must therefore: -

- Strengthen defence diplomacy as a credible counter to revisionist Chinese expansion. Australia’s likely inclusion in the Malabar exercise is a step towards a Quad consolidation.

- Decouple from China by creating economic and technological bubbles within the Quad to develop alternate supply chains in sensitive and critical sectors like 5G/6G in telecom, Internet of Things (IoT), Industry 4.0, cybersecurity, space exploration and a rare-earth industry. The Quad countries are all significant space and technology R&D hubs, and their cooperation can checkmate the Chinese Digital Silk Road and Space Silk Road.

- Within Quad, there is no agreement on trade. Therefore, it is necessary to build consensus by working on common agendas like WTO reform, writing the new rules for digital and data standards with higher standards. Separately, Australia and Japan must review their participation in a China-led RCEP, as they pursue decoupling with China.

- US allies are under pressure to increase their defence spending, which is still low, under 2% of GDP. This prevents them from joining a military arrangement in the Indo-Pacific, but they want to enter the strategic arrangement through trade and multilateral routes.

- The Quad is a workable mini-lateral. Its agenda will find resonance in other groupings working for a broader reformed multilateralism like the expanding G7 to a G10/G11, the UK-led D10, and the German-led Alliance for Multilateralism.

- The term ‘inclusive’ to describe the Indo-Pacific, was not brought up by the Quad discussants – a difference from a year ago.

India in the Quad:    India to strengthen itself to contribute to the Quad: -

- Accelerate internal ‘rearrangement’ especially in the commerce and defence sectors to be a serious beneficiary of the global decoupling from China.

- Develop institutional capacities and overcome historic hesitancies in trade and defence, to work with partners within smaller trade bubbles and minilateral alliances. In particular, India as a significant emerging digital player, must engage in multilateral groupings for the establishment of digital rules and lowering barriers to data flow.

- Quickly conclude reciprocal logistics agreement with Japan, to become a fully-engaged member of the Quad.

- Leverage the islands of the Indo-Pacific for geo-strategic advantage: India can consider building a Quad infrastructure in the Andaman and Nicobar Islands.

Germany and the Quad:  Policy-makers are abandoning Germany’s Change through Rapprochement policy with China, where its business benefitted. German public opinion on China has soured and is now meshed with the world view because of Chinese political pressure through those business links. Germany and Europe have a stake in a free, open and balanced Indo-Pacific. These interests align with the values of the Quad partners. Germany should therefore commit and flank the Quad’s aims and missions. 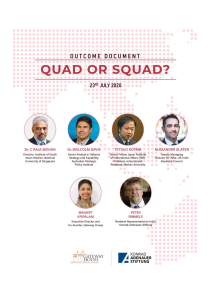