The session aimed to make industry aware and disseminate information about the program & benefits industry can reap by applying various methodologies/ Technologies for RE & CP in their units. Global and Regional Case Examples of RE and CP from industries to reduce energy cost, Waste Mgt. costs, input cost were presented by GIZ.

• Indiscriminate exploitation of natural resources has the potential to cause natural havocs at molecular & universal levels.

• Adoption of RECP strategies result in reduced production cost, optimal use of resources and higher profitability.

• Adoption of RECP approach by industries is well proven world wide specifically in developed countries and also proved its impact in Indian industries.

• RECP concept with project name of ECOPROFIT is being implemented in India since 2003 successfully in more than 80 enterprises, across various sectors and it is estimated that the minimum Return On Investment (annual) was about four times higher in comparison to the programme cost paid by companies and the highest ROI documented was 1:28.

• In Haridwar, 10 companies participated in RECP programme implemented by Uttarakhand Pollution control board under SEIP I project, 31 measures were implemented by these industries resulted in saving of INR 0.41 crores with investment of only 0.12 crore.

• While the large industries have abilities to implement strategies continually for technology and quality upgradation, the micro, small and medium enterprises (MSMEs) are constrained due to lack of information and knowledge, and financial resources. MSMEs require technical and financial support to improve their production process while cleaner production, achieving resource efficiency and reduced pollution.

• The small business units need to upgrade their management skills, capacity to gather information and upgrade their technology base.

• The (SMEs) are often liable to become polluters due to obsolete technology in their small-scale operations and/or lack of efficient pollution control systems. Also, with escalating resource prices, it would be becoming difficult for SMEs to sustain the high costs of energy, water, and material resources for production while remaining competitive in the global market. The limited institutional capacities of SMEs also pose problems of compliance with the regulatory norms. SMEs are also likely to suffer considerable economic losses due to inappropriate utilisation of available resources and inefficient means of operations.

• Resource Efficient and Cleaner Production (RECP) has come as a preventive environmental measure to facilitate pollution prevention and reduce carbon intensity per unit of products along with financial profit of the industry.

• Resource efficiency or resource productivity is often defined as the efficiency with which we use energy and materials throughout the economy, i.e. the “value added per unit of resource input”. When used in conjunction with other essential tools of environmental management.

Cleaner Production (CP) is a practical approach for sustainable methods of production. This approach needs a shift in attitudes away from pollution control and end of the pipe treatment to pollution prevention.

• Cleaner production activities include measures such as pollution prevention, resource reduction, waste minimisation and eco-efficiency. It involves better management and housekeeping, substitution of toxic and hazardous materials, process modifications, and reuse of waste products. At its core, the concept is about adopting preventive practices, rather than controlling environmental problems at the end. 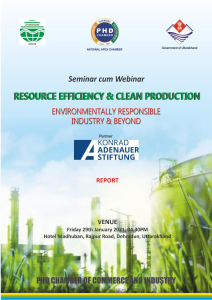