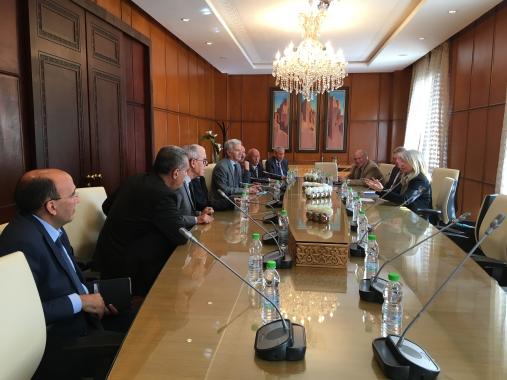 Visit to the Moroccan Constitutional Court at the occasion of the expert meeting on the introduction of the contrôle prioritaire de constitutionnalité par voie d’exception in Morocco. 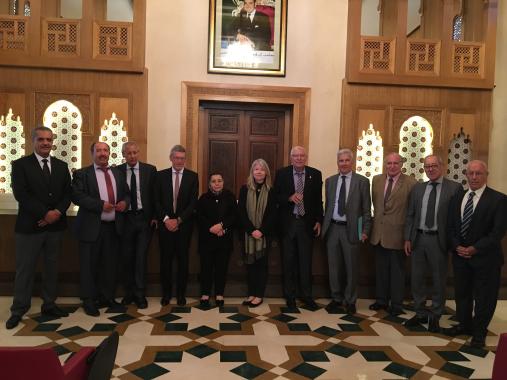 Members of the Moroccan Constitutional Court together with Dr. Anja Schoeller-Schletter, Head of the Rule of Law Programme Middle East/North Africa, Konrad-Adenauer-Stiftung 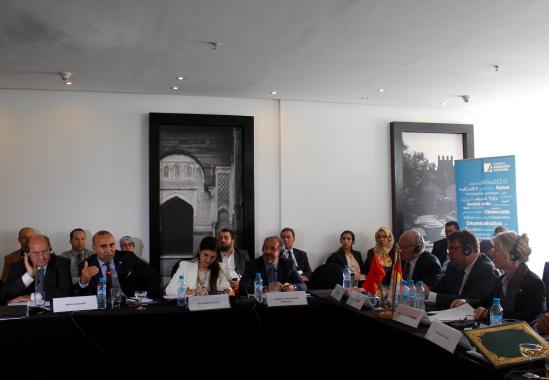 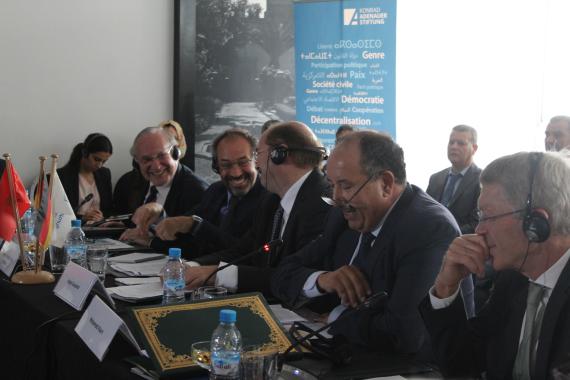 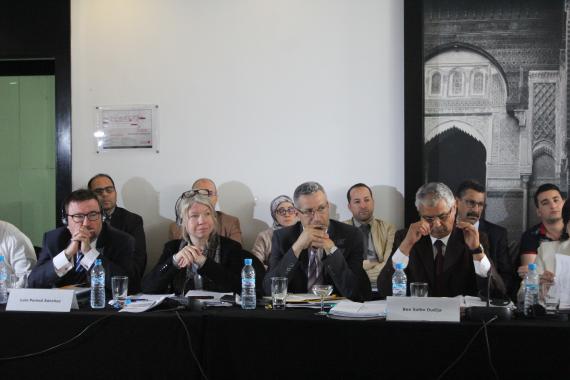 Discussants at the conference, among them, Ben Salim Oudija, the Head of the Legislative Department of the Moroccan Ministry of Justice.

Against this backdrop, the Rule of Law Programme Middle East/North Africa of the Konrad-Adenauer-Stiftung, in collaboration with the Agence Judiciaire du Royaume du Maroc, organized on June 13 an international expert meeting in Rabat, Morocco, on “The Introduction of Ex-Post Constitutional Review Procedures in the MENA Region and their Application Perspectives in Morocco”.

Together with peers from Spain, France and Germany participants discussed the consequences and expected impacts related to the introduction ofa new incidental ex-post constitutional review procedure in the Moroccan judicial system. The procedure, referred to as the Specific Judicial Review of Statues, was introduced in 2011 by the new constitution in its Article 133 and is similar to the question prioritaire de constitutionnalitéin French law or the konkrete Normenkontrolle under German law. It will allow the Constitutional Court in future to review the constitutionality of laws in the course of ongoing court proceedings and to declare these laws unconstitutional if they violate constitutionally guaranteed rights or freedoms.

The expert meeting was opened by Mr. Mohamed Kasri, Director of the Judicial Agency of the Kingdom and Dr. Anja Schoeller-Schletter, Head of the Rule of Law Programme Middle/East North Africa who outlined the importance of the new constitutional review procedure as an instrument for overseeing the constitutionality of laws and the protection of fundamental rights and freedoms. During four topic-specific sessions the opportunities, challenges and practical implications, which the Specific Judicial Review of Statutesmay entail in the Moroccan judicial system, were analyzed and debated. The discussants from abroad, among which Prof. Didier Maus, former member of the French State Council and President of the International Association for Constitutional Law, Michael Eichberger, former judge of the Federal Constitutional Court of Germany, Prof. Malte Graßhof, President of the Constitutional Court of Baden-Württemberg,shared insight from countries with long standing traditions in handling ex-post constitutional review procedures. After tracing the legal bases and conditions of admissibility in the represented countries, the participants assessed and compared different approaches with regard to the role of the ordinary courts in referring a legal question to the Constitutional Court.

Among the most disputed topics were the existence of filtering systems, the legal consequences and the scope of the procedure. In view of the expected upcoming caseload participants stressed the need to adopt the court infrastructure accordingly (e.g. with additional clerks). In their concluding remarks, the international experts raised the need to clarify the extent of the power of the parties to challenge the constitutionality of a law, to develop a constitutional notion of the term “law” and to define the rights and freedoms guaranteed by the constitution. The aim of the expert meeting was to provide feasible solutions to legal and technical challenges, which the Moroccan judicial system may face in terms of balancing legal security and the protection of right and freedoms.

The discussions took place in a particularly timely context since the draft organic law 18-65, that was adopted by the Council of Ministers in its revised version, was currently under discussion in Parliament. That was one reason why the expert meeting found great resonance within the judicial, political and academic community in Morocco, with various members of the Parliament, among the more than 100 participants.

The Rule of Law Programme Middle East/North Africa of the Konrad-Adenauer-Stiftung would like to thank all participants for their valued contributions and fruitful discussions during the sessions. 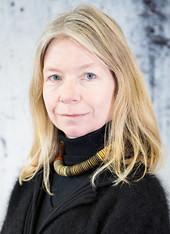