Virtual Dialogue on the Indo-Pacific - www.kas.de

Virtual Dialogue on the Indo-Pacific

On 15 February 2022, the KAS Office Korea and the KAS Office India jointly hosted a virtual dialogue on the Indo-Pacific, which gathered five Indian and four South Korean subject matter experts. The two-hours long virtual meeting invited for an analytic comparison of the respective regional policy approaches, perceptions and strategies vis-à-vis the Indo-Pacific and related developments, as well as a look at the current state and potential of bilateral relations between the Republic of India and the Republic of Korea and their joint contributions to a rules-based international order as well as a free and open Indo-Pacific.
15. Februar 2022 Bestellinformationen

• South Korea should not subscribe outright to any particular regional or extra-regional vision or strategy for the Indo-Pacific region, yet at the same time Seoul should not discourage economic, strategic or people-to-people cooperation with any specific country in the region.

• South Korea will most likely continue to engage positively with both China and the US in economic, security and geostrategic terms. This stance currently safeguards the country's national interests and will most probably continue to persist in the foreseeable future.

• Under the leadership of Prime Minister Modi, India has developed a clear vision for its Indo-Pacific strategy, which focuses on keeping the region open, inclusive and equitable for all states, and thus does not solely address India's own national interests.

• In essence, preparedness, partnerships and the promotion of an interconnected region are now building the cornerstones of India's Indo-Pacific vision.

• In recent years, one could observe the emergence of criss-crossing networks in the region, leading to several processes of institutionalisation in the sense of a series of mini-laterals. India, which is a major driver of this ongoing phenomenon, is pursuing the goal of an organic institutionalisation, where thematic coalitions are organically formed around issues of joint interest and concern.

• There are several opportunities for increased cooperation between India and South Korea, as both countries are partners of the United States and together can help ensure a lasting US presence in the region, in addition to which there is also much potential for the development of issue-based coalitions of mutual interest between the two likeminded democracies.

• As the issue of an increasingly belligerent China has given rise to various new forms of cooperation between stakeholders in the region, the decisive yardstick now rests on the ability of finding a common ground on how these relations can be effectively sustained beyond the China question.

• South Korea and India, as ambitious middle powers, can offer to many countries in the region an attractive choice and alternative against authoritarian powers.

• South Korea faces a great dilemma with respect to the Sino-American power competition. On the one hand, Seoul is being pressured by the US to take a more proactive stance against China, for example on the Taiwan issue. On the other hand, China is putting pressure on South Korea by threatening Seoul's leadership with dire military and economic repercussions if it were to cooperate with the US on matters such as Taiwan's sovereignty.

• Free international shipping lanes within the Indo-Pacific region are vital for the trade and energy security of the entire world, and therefore a rules-based order is essential for the development and growth of the world at large.

• South Korea does not seem to intend to become a formal and official member of QUAD at the moment, however, this does not imply that the South Korean government rules out partial cooperation with QUAD members in the areas of development of cross cutting technologies and strengthening of regional supply chains.

• Indo-Korean security, defence and economic relations have been strengthened by the substantive convergences between India's “Act East Policy” and South Korea's “New Southern Policy” and provide a good starting point for increased cooperation between the two nations.

• A major point of criticism concerning South Korea's “New Southern Policy” is that the peace pillar is insufficiently buttressed. In this context, Korea's strategic engagement in the Indo-Pacific region could be significantly improved through an enhanced and intensified strategic relationship with India.

• The future of Indo-Korean relations will mainly rest on three key developments: the scale of the Sino-American rivalry, the North Korea question and the outcome of the South Korean presidential election in March of this year.

• The cutting-edge technology sector will represent the most decisive and unusual shift in geopolitics in the decades ahead and already today constitutes the focal point of the strategy of individual nations and multilateral groupings within the Indo-Pacific region.

• The QUAD's primary objective appears to be not so much to ensure that its member states dominate critical technologies, but rather to prevent China from doing so.

• South Korea is crucial for many cutting-edge technologies and is far ahead of India as a technology power, but will face manpower woes due to its extremely modest population growth.

• As countries such as the US, Japan and India increasingly erect barriers and impose bans on Chinese technologies entering their respective markets, South Korean companies may in the near future encounter the same barriers simply because some Korean companies are regarded to be working too closely with the Chinese government.

• Both China and the US are at the moment crucial to South Korea's national interests, with the Korean-American alliance forming the cornerstone that maintains a stable security situation on the Korean peninsula and China being South Korea's most important trading partner.

• South Korea's participation alongside India in soft power alliances such as an extended network around the QUAD or a potential Indo-Pacific Economic Framework (IPEF) is looking very much feasible and promising.

• Over the last two to three years, the security and defence elements in the Indo-Pacific strategy of various nations and soft power approaches have gradually begun to merge together.

• Structurally, India and South Korea complement each other very well in the economic sphere, whereas the core competencies of both countries are very different, thus offering great potential for mutual gain through economic cooperation. 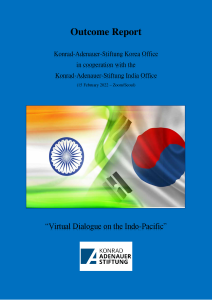