Climate change is one of the most important threats facing the planet today, and cities play a crucial role in solving the problem by concentrating more than half of the world's population, consuming most of the energy, and being vulnerable to climate risks. In the face of this, by acting locally and collaboratively, cities have a significant global impact through the implementation of sustainability practices.

The two-day event included lectures, panels and business with companies, governments, investors, opinion formers and representatives of civil society participating from Brazil and other countries, such as Chile, Colombia, Argentina and Canada. It was possible to facilitate strategic dialogues between municipalities and key actors in the private sector about new forms of financing green and climate resilient infrastructure and to raise awareness and broaden the influence of the discussion to reach political actors.

Further information on the event and its outcomes is available  in the publication that EKLA-KAS did together with CDP, "Opportunities for private investments in sustainable infrastructure projects in Latin American Cities". 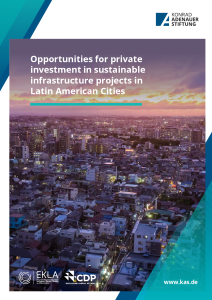