More than twenty years after the end of the war, in 1995, Bosnia and Herzegovina (B&H) is still burdened by the problems from that time: national intolerance, political discordance and economic decline. By its constitution, it is divided into two entities, The Federation of B&H (FB&H) and the Republic of Srpska (RS), and the Brcko District. This is of relevance for understanding its media system. Most of the media in B&H are divided along entity, ethnic, political-interests and economic lines. The working conditions of most journalists are very difficult. They are irregularly paid, have low salaries, an undefined status and contracts that do not guarantee workplace security. More

Bosnia and Herzegovina’s score in the Reporters Without Borders Freedom of the Press Index hasn’t shown any improvement in comparison to 2020. It is still 58th out of 180 countries in the latest 2021 ranking, nonetheless the Balkan country clearly performs comparatively well by South East European standards, but significant deficits remain. More

The media market in B&H is fragmented and oversaturated. The media picture of B&H consists of a relatively large amount of media compared to the about 3.5 million citizens and a small market space to match. The advertising market has dropped dramatically in recent years – from 2014 to 2019 by around 40 percent – currently being at about 18 million EUR annually, according to the IREX media Sustainability Index 2019.  More 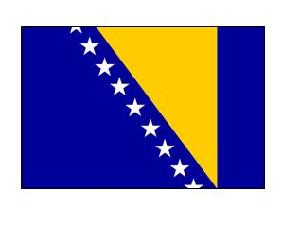 Flag of Bosnia and Herzegovina