Here we are presenting selected books, tools for journalists and working papers, covering topics about media in South East Europe.

Guide on mobile reporting for journalists and newsrooms

A Field Guide to "Fake News" and Other Information Disorders

The guide explores the use of digital methods to study false viral news, political memes, trolling practices and their social life online.

Reconnecting with citizens - from values to big data: Communication of governments,
the EU and political parties in times of populism and filter bubbles

The report is a regional overview of the recently conducted national research on the role of editors in six countries in the region.

Publication on political influences and business interests in B&H, Serbia and Montenegro

The report arises from a visit to Prishtina and covers a series of interviews and meetings with Kosovo media leaders.

The handbook is written for journalists who want to become self-employed and develop their own business model on the Internet.

The toolkit is designed for journalists, bloggers and other information professionals who need to get access to information held by public bodies for their stories.

Media Reforms in Turbulent Times: The Role of Media Assistance in the Establishment
of Independent Media Institutions in Serbia

This paper explores the development of independent media institutions in Serbia, from the mid-90s until today.

Reporting on interreligious and interethnic tensions: The meaning behind the headlines

The publication covers main findings of research project on values of cultural diversity and intercultural communication in the Macedonian society.

The book examines the implementation of media accountability mechanisms created, operated and followed by media professionals on a voluntary basis.

Media policy in Croatia has been evolving as a result of the transitional systemic changes that have deeply affected the character and functioning of the media and other communication processes.

Assessment of the level of media freedom in Bosnia and Herzegovina.

A guide for investigative Journalists in the Balkans. 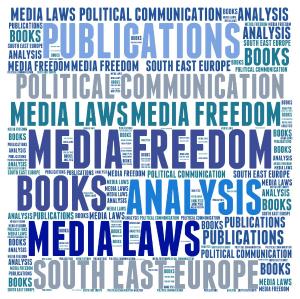