The Netherlands have voted

The European Office of the Konrad-Adenauer-Stiftung is delighted to invite you to the next session of our event format "The Morning After". In this online format, we are monitoring the Parliamentary and/or Presidential Elections in European states and discuss the results with our KAS colleagues in the respective country. Furthermore, we try to assess the implications the results could have for the country’s relationship with the European Union. This session will focus on the Netherlands, where the Parliamentary Elections 2021 will take place on 17 March.
18. März 2021 10:00 - 10:45 Uhr 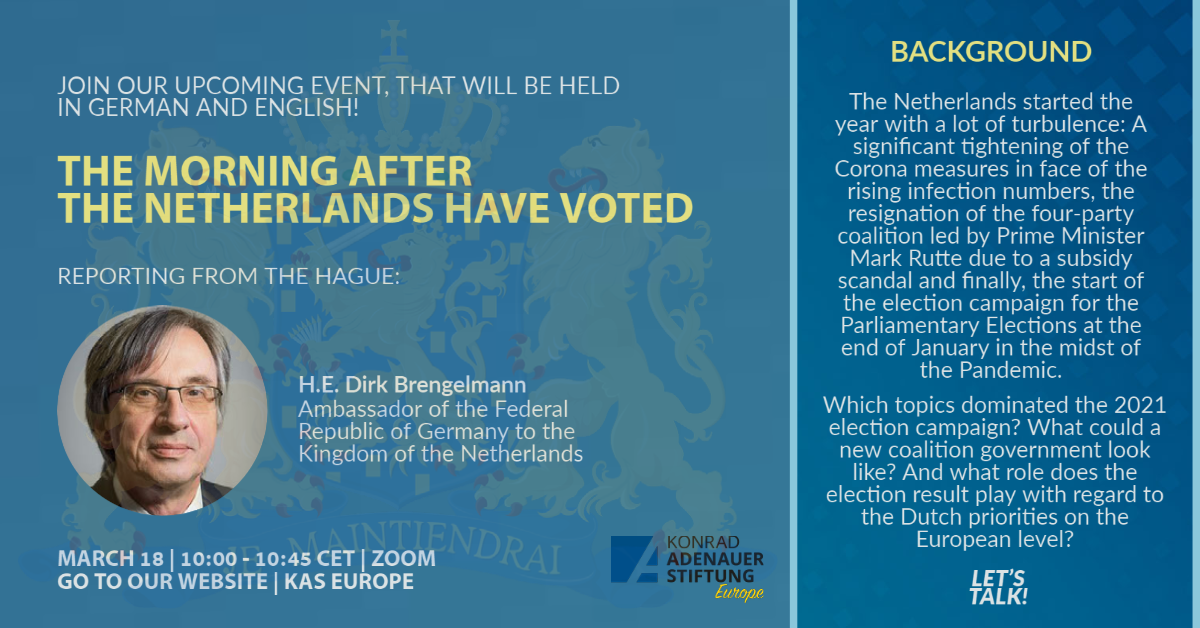 The Netherlands started the year with a lot of turbulence. First, the government had to tighten the Corona protection measures significantly, as the number of cases skyrocketed despite all previous restrictions. In addition, the four-party coali-tion led by Prime Minister Mark Rutte resigned due to a subsidy scandal which unfolded several years ago, and finally, the election campaign for the Parliamentary Elections in March began at the end of January. These will have to take place under the impact of the COVID-19 pandemic and have therefore been extended beyond the set date (17 March) to three days in order to prevent crowding at the polling stations. Older citizens also have the option of voting by mail - a form of voting that has not been used in the Netherlands so far.

The current coalition of the liberal Volkspartij voor Vrijheid en Democratie (VVD), the Christian Democratic Christen-Democratisch Appèl (CDA), the left-liberal Democraten 66 (D66) and the Calvinist ChristenUnie (CU) has to pay less attention to coalition peace than usual because it is "only" a caretaker government and is competing with parties that are politically further to the left and the right-wing populists around Geert Wilders. According to current polls, the liberals are still clearly ahead of their political competitors and could thus also lead the next coalition government. Behind them, several parties are more or less on a par and could also play a decisive role in the next government formation.

Which topics dominated the 2021 election campaign? How relevant was it for the political debate that the incumbent gov-ernment was only in office on a caretaker basis? What could a new coalition government look like and who has the best chance of becoming Prime Minister? What role does the election result play with regard to the Dutch priorities on the Euro-pean level?

The event "The Morning After – The Netherlands have voted" will take place on Thursday, 18 March 2021 from 10:00-10:45 h via Zoom. We are looking forward to discussing the above-mentioned topics with H.E. Dirk Brengelmann, Ambassador of the Federal Republic of Germany to the Kingdom of the Netherlands. After the discussion between Ambassa-dor Brengelmann and Dr. Hardy Ostry, Director of the European Office of the Konrad-Adenauer-Stiftung, the audience will have the opportunity to direct its questions to both speakers. The event will be held in German with simultaneous interpretation into English.