The European Office of the Konrad-Adenauer-Stiftung is pleased to invite you to the next event of our format "The Morning After". In this online format, we follow parliamentary and/or presidential elections in European countries and exchange views with our on site KAS colleagues on the morning after each election about the most important devel-opments on election day. This time we take a look at Albania, where Parliamentary Elections are scheduled for 25 April 2021.
26. April 2021 09:30 - 10:15 Uhr 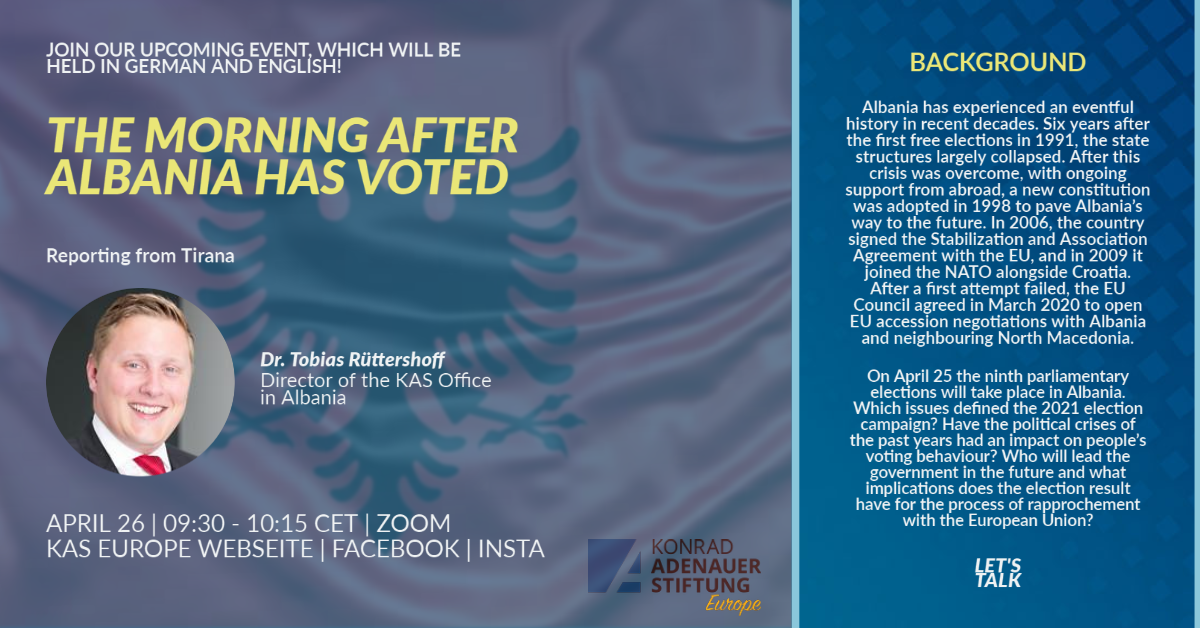 Albania has experienced an eventful history in recent decades. After the country toppled the communist regime in 1990, which had almost completely sealed off the state in the Western Balkans from the outside world for decades and established a personality cult around head of state and party Enver Hohxa, a long-lasting transformation process was initiated. Six years after the first free elections in 1991, the state structures largely collapsed in the course of the so-called "Lottery Uprising". After this crisis was overcome, with ongoing support from abroad, a new constitution was adopted in 1998 to pave Albania's way to the future.

In 2006, the country signed the Stabilization and Association Agreement (SAA) with the European Union, and in 2009 it joined the NATO alongside Croatia. Like all countries in the Western Balkans, Albania was offered the prospect of full European membership from Brussels, if necessary reforms were implemented. After a first attempt failed, the European Council agreed in March 2020 to open EU accession negotiations with Albania and neighbouring North Macedonia - with Albania subjected to the fulfilment of certain conditions. In 2017, the Socialist Party led by Prime Minister Edi Rama emerged victorious from the last parliamentary elections with an absolute majority. When indications of vote-buying and intimidation in the run-up to the elections became known in 2019, large sections of the opposition decided to return their mandates and thus boycott parliament. Participation in the local elections was also subsequently cancelled. In this situation, citizens are now deciding the future course of their country.

Which issues defined the 2021 election campaign? Have the political crises of the past years had an impact on people's voting behaviour? Who will lead the government in the future and what implications does the election result have for the process of rapprochement with the European Union?

The event "The Morning After – Albania has voted" will take place on Monday, 26 April 2021 from 09:30-10:15 CET via Zoom. We are looking forward to discussing the above-mentioned topics with Dr. Tobias Rüttershoff, Director of the KAS Office in Albania. After the discussion between Dr. Rüttershoff and Dr. Hardy Ostry, Director of the European Office of the Konrad-Adenauer-Stiftung, the audience will have the opportunity to contribute their questions to the discussion. The event will be held in German and will be simultaneously translated into English.