Rethinking Global Trade – Where is it heading?

In the beginning of the year, many economists were cautiously optimistic towards global trade growth. But the Russian invasion of Ukraine and the ensuing sanctions have put global supply chains under increased strain, just as they were beginning to recover from the effects of the global pandemic. The resulting current rise in inflation, initially considered to be temporary by many Central Banks, is now expected to be a more long-term phenomenon due to the new geopolitical reality.

Almost exactly 100 days ago, the new government of the Netherlands was sworn in and concluded the longest negotiation period in the history of the country. This is all the more astonishing, since the incumbent four party coalition reaching from conservative liberal Volkspartij voor Vrijheid en Democratie (VVD) over social liberal Democraten 66 (D66) and Christen-Democratisch Appèl (CDA) to the Calvinist ChristenUnie (CU) has already led the country during the last legislative term. Nevertheless, the old and new government set out an ambitious plan to make the Netherlands climate-neutral, to ensure affordable housing in all parts of the country and to play a constructive role on the European stage, where the country has often expressed outspoken views, which regularly weren’t shared by the Southern EU member states.

Geopolitics in Central and Eastern Europe

On behalf of the European Office of the Konrad-Adenauer-Stiftung and the Andrássy University Budapest, we are honoured to invite you to participate in our international conference "Geopolitics in Central and Eastern Europe".

"Think Digital!" 2022 is a project by the Konrad-Adenauer-Stiftung and the Electro and Digital Industry Association (ZVEI). In a series of high-level political events in Brussels throughout 2022, we will bring together representatives from the European Institutions, think tanks, research institutions, civil society, and the private sector.

The Strategic Compass – A true milestone in European Defence and Security Policy?

"Europe is in danger" expressed the High Representative of the European Union for Foreign Affairs and Security Policy a few weeks ago. The famous statement of Josep Borrell may have sounded exaggerated to some ears but against the backdrop of a war at the gates of the European Union and the uncertain geopolitical future – also with a view to China and the global balance of power – the statement seems now more accurate than ever.

Europe's greatest achievement – The Single Market as a way towards Post-Pandemic-Recovery?

In April 2020, one month after many European countries closed their borders to stop the spread of the Coronavirus pandemic, a letter, signed by 23 CEOs of leading European companies, called on EU leaders to turn the Single Market into the continents central instrument for economic recovery. Faced with the risk of rising unilateral action by EU member states, the industrial leaders argued that the response should be more, not less Europe. 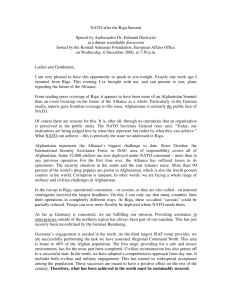 "NATO after the Riga Summit"

Speech by Ambassador Duckwitz at a dinner roundtable discussion in the European Office of the Konrad Adenauer Foundation. 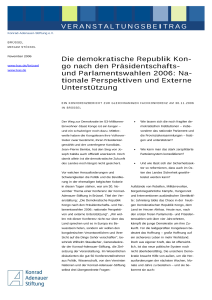 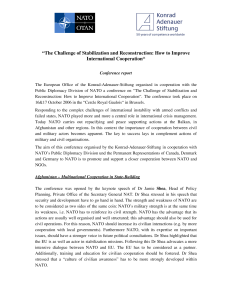 “The Challenge of Stabilization and Reconstruction: How to Improve International Cooperation“

Responding to the complex challenges of international instability with armed conflicts and failed states, NATO played more and more a central role in international crisis management. Today NATO carries out repacifying and peace supporting actions at the Balkan, in Afghanistan and other regions. In this context the importance of cooperation between civil and military actors becomes apparent. The key to success lays in complement actions of military and civil organisations.The aim of this conference organised by the Konrad-Adenauer-Stiftung in cooperation with NATO’s Public Diplomacy Division und the Permanent Representations of Canada, Denmark and Germany to NATO is to promote and support a closer cooperation between NATO and NGOs.The conference took place on 16&17 October 2006 in the “Cercle Royal Gaulois“ in Brussels. 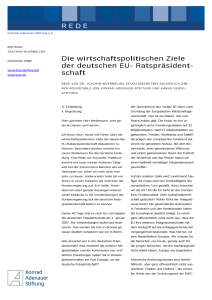 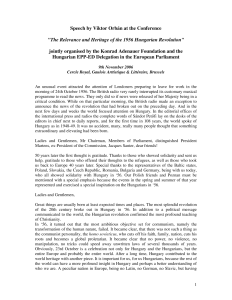 "The Relevance and Heritage of the 1956 Hungarian Revolution"

Speech by Viktor Orbán, Chairman of Fidesz (Hungarian Civic Union) and Former Prime Minister of Hungary, at the commemoration jointly organised by the European Office of the Konrad-Adenauer-Stiftung and the Hungarian EPP-ED Delegation in the European Parliament 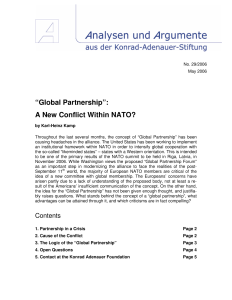 Throughout the last several months, the concept of “Global Partnership” has been causing headaches in the alliance. The United States has been working to implement an institutional framework within NATO in order to intensify global cooperation with the so-called “likeminded states” – states with a Western orientation. This is intended to be one of the primary results of the NATO summit to be held in Riga, Latvia, in November 2006. While Washington views the proposed “Global Partnership Forum” as an important step in modernizing the alliance to face the realities of the post-September 11th world, the majority of European NATO members are critical of the idea of a new committee with global membership. The Europeans’ concerns have arisen partly due to a lack of understanding of the proposed body, not at least a re-sult of the Americans’ insufficient communication of the concept. On the other hand, the idea for the “Global Partnership” has not been given enough thought, and justifia-bly raises questions. What stands behind the concept of a “global partnership”, what advantages can be attained through it, and which criticisms are in fact compelling? 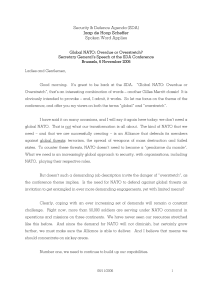 Conference organised in cooperation with SDA

Conclusions of the Workshop