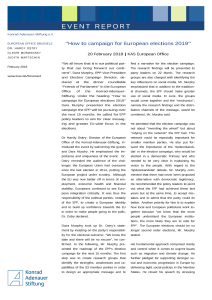 How to campaign for European elections in 2019

“We all know that it is our political party that can bring forward our continent”, Dara Murphy, EPP Vice-President and Election Campaign Director, declared at the dinner roundtable “Friends of Parliament” in the European Office of the Konrad-Adenauer-Stiftung. Under the heading “How to campaign for European elections 2019” Murphy presented the election campaign the EPP will be pursuing over the next 15 months. He called for EPP policy leaders to aim for clear messaging and greater EU-wide focus in the elections.

Neustart in Niedersachsen – Erwartungen an Europa 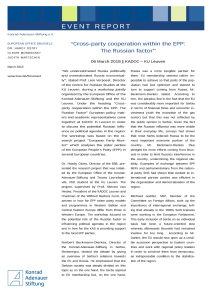 Cross-party cooperation within the EPP

"We underestimated Russia politically and overestimated Russia economical-ly", stated Prof. Lien Verpoest, Director of the Centre for Russian Studies at the KU Leuven, during a workshop jointly organized by the European Office of the Konrad-Adenauer-Stiftung and the KU Leuven. Under the heading “Cross-party cooperation within the EPP: The Russian Factor”, European policy makers and academic representatives came together at KADOC in Leuven in order to discuss the potential Russian influence on political agendas in the region. 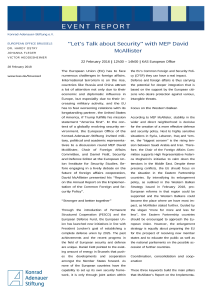 The European Union (EU) has to face numerous challenges in foreign affairs. International terrorism is on the rise, countries like Russia and China attract a lot of attention not only due to their economic and diplomatic influence in Europe, but especially due to their increasing military activity, and the EU has to fear worsening relations with its longstanding partner, the United States of America, if Trump fulfills his mission statement “America first”. 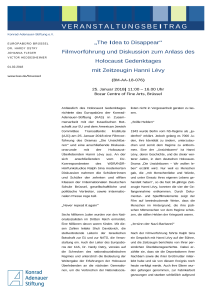 "The Idea to Disappear" 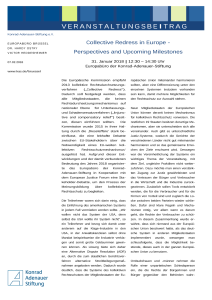 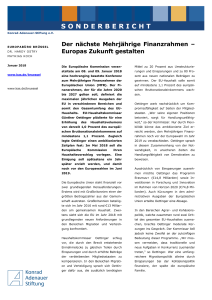 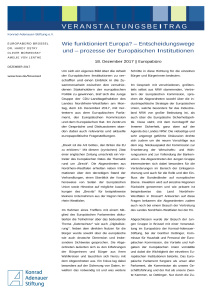 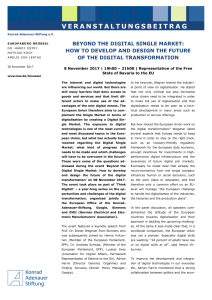 BEYOND THE DIGITAL SINGLE MARKET

HOW TO DEVELOP AND DESIGN THE FUTURE OF THE DIGITAL TRANSFORMATION

The internet and digital technologies are influencing our world. But there are still many barriers that deny access to goods and services and that limit dif-ferent actors to make use of the advantages of the new digital means. The European Union therefore aims to complement the Single Market in terms of digitalisation by creating a Digital Single Market.