Exchange between traditional authorities, guardians of traditions and ancestral practices and young people from all fields of the university on the Emergence of Africa and the Challenge of Climate Change.
11. Oktober 2017 Bestellinformationen 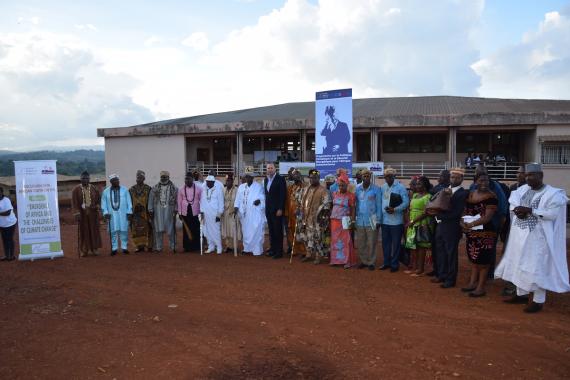 The goal of this meeting between the traditional authorities, guardians of traditions and ancestral practices; and young people from all fields of the university was aimed at facilitating dialogue and exchange between the different generations, notably on the theme that brought us together this afternoon of October 6, 2017 in the Banekane campus of the” Université des Montagnes” (UDM).

This year 2017, the Western Region of Cameroon has experienced several disasters related to climate change, notably in the city of Dschang which experienced numerous landslides. The choice of the province was therefore significant.

Konrad Adenauer Foundation (KAS) co-organized the event with the Esperanza-Cade association. In fact, on that day on the Banekane campus, the Mountains university community prepared a red carpet reception for several African monarchs from 5 African countries, namely Benin, Togo, Gabon, Republic of Congo and Cameroon. The program consisted of a welcome message from the President of the UDM, Prof. Lazara Kaptué, followed by that of the Resident Representative of KAS, Prof. Oliver Ruppel, who did not fail to connote his joy to be among all these personalities, and especially to participate in this debate which aims to awaken the Cameroonian youth. Professor Ruppel, stressed on the importance of having an active awareness on the impact of climate change worldwide and the implementation of innovative ideas propelled by the genius of the youths. All of this is directed at reducing the effects of greenhouse gas emissions in their communities and all over the globe. This first part of the program ended with a welcome message from the Executive Secretary of Esperanza-Cade association Mrs Fezeu.

Thereafter several experts gave presentations on: The influence of traditional chiefdoms on the problem of climate change, examples of youth initiatives already in place and aspect of educating and training young people. The various themes discussed during this meeting were of great interest to the assembly.

The goal here was to raise awareness among young people who constitute the highest percentage of the population. This future generation will be more impacted by the effects of global warming if nothing is done.

Given that education is an essential part of the global response to climate change. This meeting helped young people and kings to understand but above all to think about the establishment of concrete actions to mitigate the impact of global warming.

The initiative was applauded by all stakeholders. A request has therefore been made to the organizers, to create a regulated platform in order to facilitate exchanges between these two social strata which globalization tends to separate nowadays.