Bangladesh- The Vietnam of South Asia- Leveraging the Learnings For India

Bangladesh - A country that began as a case study for development, is now on top of the global GDP charts. GDP growth in 2019 was an enviable 8.4% - twice that of India’s during that year – and is one of the few countries to have maintained a positive growth rate during the Covid-19 pandemic. It is a proud moment for Bangladesh – and the Indian sub-continent. Just as Vietnam amazed the world with its fast-paced growth, so too with Bangladesh which has displayed a will to grow despite the odds. Vietnam instituted market and economic reforms, known as Doi Moi, which enabled it to achieve rapid economic growth and industrialization especially in the fields of textiles & garments to mobiles & electronics. Bangladesh followed a similar strategy which is directly connected with the textiles and garments industry which accounts for 80% of the country’s exports. Bangladesh also enjoys preferential trade treatments with the European Union, Canada, Australia, and Japan with negligible or zero tax. The European Union accounts for 24% of Bangladesh’s total trade. Therefore, in order to examine areas of trade & economics, supply chain & connectivity, geopolitics and soft power further; the Gateway House, Mumbai & the India Office of the Konrad-Adenauer-Stiftung (KAS) organized a virtual webcast on "Bangladesh: The Vietnam of South Asia - Leveraging the Learnings for India" on 18th March 2021 to find answers to questions such as: - What can India, South Asia and the world learn from Bangladesh’s successful development trajectory? - How can trade increase between India and Bangladesh for the overall benefit of the region? How can the two economies complement each other? - How can India establish itself in the global manufacturing supply chain like Bangladesh and Vietnam? - How will the tussle between US-China, India-China, Quad-China affect other Asian countries in the region? Will they choose sides? How will they manage their relationships with conflicting powers? - How can the cultural relationship and soft power between India and Bangladesh be capitalized in the economic front?
19. März 2021 Bestellinformationen

The increasing acknowledgement from the global community of Bangladesh’s success on economic and social parameters could not have come at a better time. 2021 marks the occasion with triple celebrations: the Mujib year signifying the 100th birth anniversary of Bangabandhu Sheikh Mujibur Rahman, the father of the nation; the 50 years of Bangladesh’s independence; and 50 years of India Bangladesh diplomatic ties. Considered as South Asia’s Vietnam, Bangladesh is increasingly seen as a model for South Asian countries.

Economic success: Bangladesh is poised to be the 25th largest economy by 2035 and aims to be a middle-income country by 2021 and a developed country by 2041.

Bangladesh is now among the leading exporters of ready-made garments (RMGs) and textiles. It is becoming an important link in global supply chains and a global leader in microfinance. The country is taking steps to diversify its export mix and move beyond its staple of RMGs and textiles, which currently account for around 80% of its exports.

Covid Management: Bangladesh’s economy grew by 5.2% during the pandemic. The economy opened up quickly after a brief lockdown and the public and private sector returned to work in order to stabilise production and maintain investments and trade. Its aim was to strike a ‘balance between life and livelihood’. This was buttressed by economic stimulus packages to stimulate and direct monetary support to citizens.

Gender-inclusive growth: A significant part of Bangladesh’s growth story is the socio-economic empowerment of women. Helmed by a woman, Bangladesh is a pioneer in the advancement of women in the domestic and international sphere. Women constitute 95% percent of the RMG sector workforce. With the advent mobile phones, digital literacy and microfinance, women are further setting up their own businesses. In the United Nations, Bangladesh has actively raised women-centric issues.

VIETNAM: A model to emulate

Doi Moi: The success of Vietnam is credited to the Doi Moi policy which was initiated in 1986 with plans and guidelines for the country’s growth and development. Vietnam is evolving from a centrally-planned economy to a market-oriented economy and is restructuring itself to efficiently use all resources while focusing on institutional reforms, human resources and infrastructure development.

Economic miracle: Vietnam now has 16 new Free Trade Agreements (FTAs) including the recent EU-Vietnam FTA which has eliminated nearly 99% of customs duties between the two countries. Vietnam is also part of the Regional Comprehensive Economic Partnership. It is important in the global supply network, aided by rising labour costs in China and geopolitical reasons driving countries, to reduce their dependence on China.

Vietnam’s $260 billion export mix has evolved away from the dependence on textiles, now reduced to 24% of total exports.  Electronics are increasingly being produced and exported from Vietnam, as companies shift from China. Vietnam’s ecosystem is conducive for export growth and supports its small and medium size companies, which in turn feed into the larger multinational companies, and eventually themselves become major exporters.

Geopolitics: Vietnam’s success is also credited to its pragmatic policies. Vietnam has unburdened its economic relationships of its history and established extensive trade relations with countries like the United States, which was its biggest enemy a few decades ago.

LEARNINGS FOR INDIA AND SOUTH ASIA

Awareness: India needs to expand its awareness of neighbouring countries like Bangladesh. Misinformation and lack of knowledge have become obstructions in the relations. Instead, the close cultural affinity can be leveraged to India’s advantage. This is evident in the automobile market where the customer profile among consumers in Sri Lanka, India and Bangladesh are similar, and where India provides both customisation and supportive after sales service. This is where Indian companies score over their Chinese counterparts. Indian businesses are loved and welcomed in Bangladesh. Companies such as Tata Motors, Godrej, Marico, Emami, Asian Paints have a strong presence.

Connectivity: South Asia can learn from ASEAN’s example of development through regional economic cooperation. South Asia is the fastest growing region in the world, but also the least integrated. Institutional arrangements such as SAARC have not lived up to expectation, despite scope for cooperation in the IT sector, regional investment zones, trade and transport. Transport infrastructure like development of inland waterways between Bangladesh and India can effectively serve the regional economy. For instance, the Chittagong Port in Bangladesh and India’s North-eastern states have been linked. Other areas such as trade in power are opportunities for further cooperation. 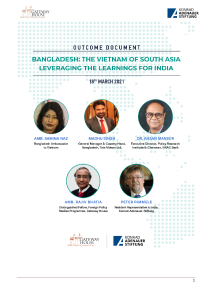