Myanmar: Hundred days after the coup

The Gateway House Mumbai in partnership with the India Office of the Konrad-Adenauer-Stiftung organised a virtual discussion on the topic "Myanmar: Hundred days after the coup" on 13th May 2021. The recording of this virtual event can be viewed at: https://www.youtube.com/watch?v=xqIvv5jpoao
14. Mai 2021 Bestellinformationen

This week, Myanmar’s generals marked 100 days of self-declared junta rule in the nation. Myanmar has navigated through years of military and civilian leadership. Throughout, the Tatmadaw – the Myanmar military - has remained the most powerful institution, and has been since the country’s independence in 1948. An intensive and wide-ranging discussion on the 100 days of the 2021 coup, brought out the complexities and the stakes involved. A unique panel, comprising a thinker each from Myanmar and its two key neighbours - Thailand and India’s North East Region - shed light on aspects that are often not probed with clarity.

- Backdrop: The coup took place due to the National League for Democracy (NLD) ignoring the Army’s complaints about the 2020 elections being fraudulent. A compromise could have been achieved, as military and civilian leaders often do in neighbouring Thailand. However, the underlying tension between the NLD and Army made the coup inevitable. The differences over constitutional reform became a major dispute between the two sides.
- The Conflict: The Military and the Civil Disobedience Movement, each feels that it can prevail over the other. The youth in Myanmar has been radicalized. The situation has now moved past Aung San Suu Kyi, even though she remains a popular figure. On the flip side, the opposition to the military this time has few well-known faces and names, unlike in 1988.
- Way forward: The country could end up either in an internal ‘implosion’ signifying a complete breakdown of state machinery, or an ‘explosion’ meaning exodus of refugees and spread of illegal activities affecting all the neighbouring states. The future for Myanmar, its civilians and neighbouring states remains uncertain.

- The United Nations: The United Nations has been quick and forthright in condemning the military for executing the coup. The United Nations Secretary General said he would do everything to reverse it and punish the guilty. However, ‘coordinated action’ by the international community has been a disappointment.
- The United States & Europe: The U.S. and E.U. are strong proponents of sanctions, but have little leverage over Myanmar’s military.
- ASEAN: On ASEAN’s role, the panel remained divided. One view was that ASEAN could not achieve much in terms of reconciliation, while others argued that, with greater international support and a stronger internal instinct for a solution, ASEAN alone could succeed in defusing the crisis and facilitating a national dialogue.
- China & Russia: China, the principal player, supports ASEAN’s mediation initiative, but was expected to step in if ASEAN failed. Russia is backing Beijing, though it has its own special relationship with the Myanmar military.
- Economic Impact: The panel was in agreement on the devastating impact on the nation’s economy. Economic growth, already affected by the pandemic, was heading south, a cause for much worry to investors from abroad.

- The North East: From the North East perspective, India’s policy to ban refugees and suspend the free border regime makes little sense. There are strong economic, social and cultural linkages, and people travel for basic provisions, medical aid, etc. The Free Movement Regime between the two countries was suspended in March 2020; it is also a drugs and arms trade corridor. India should adopt a more humanitarian approach and be more open and firm in espousing democracy in Myanmar.
- Pragmatic policies: The panel conceded that guided by considerations of internal security, geopolitics and the desire to curb China’s rising influence, India cannot avoid a more calibrated strategy. Nevertheless, India should be more active in promoting reconciliation, by working more closely with ASEAN. 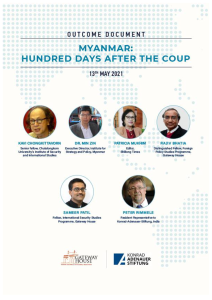