Plural Ideas of Justice: Stories, Narratives and Experiences from India

This two-day workshop, held on 23rd and 24th of April 2021, sought to explore the ideas of justice that emerged from different and diverse mechanisms of conflict resolution. While the quest to develop a concrete and definite form of justice will keep societies forever engaged, this workshop was successful in its attempt to bring together stories, narratives, oral histories and analysis that reveal people’s experiences with an ‘idea of justice’.
26. April 2021 Bestellinformationen

We trace below the key thoughts and themes that highlighted every panel in the workshop:

This panel comprised of papers elaborating how different communities – the LGBTQI, the Muslim Community and communities in Nagaland – engage in conflict resolution practices in the shadow of state law and its regulatory systems. We learnt that individuals conflate the various legal orders governing their disputes, thus causing the different legal systems – community based and state-based ones – to work in “collocation”, i.e., simultaneously with each other.

The papers engaged scholars from the disciplines of law, human rights and sociology. Important questions such as “who gets to declare what is customary law?” focussed on the issue of the inclusiveness of the legislative process in terms of the participation from the different communities that are directly impacted by a legislation, were prominently discussed.

A very vibrant and lively panel, this discussion focused on examining the veracity of digital platforms as legitimate platforms for conflict resolution and grievance redressal. The themes of the #MeToo protest about sexual harassment of women, the online presence of the farmer’s protest and the Anti-CAA protests, the voicing of “calls for justice” on Facebook and Instagram in light of women related crimes such as Nirbhaya and the Hyderabad rape incident.

The panel saw intense debates about the extent to which technology could be trusted and the type of ‘safety net’ that anonymity in the virtual world offers to protestors and victims alike. While both panellists and the chair were cautious in lauding the role such platforms have played in to furthering justice, they remained divided on the extent of faith to be entrusted in them.

A primary theme that foregrounded the entire panel discussion was extent and worth of risk involved in submitting to the powers of technological giants such as a Facebook (a different form of injustice) in the pursuit of a certain form of justice and examining the political bias, and the lack of neutrality in platforms.

Panel 3: The role of the non-state within the State

The four papers in this panel were very different in terms of the content and data, but contributed to a single theme of what happens when conflict resolution mechanisms particular to non-state actors get encapsulated within the state’s dictionary of dispute settlement. In one paper the focus was the outsourcing of state-run Lok Adalats to a private meditation firm in order to have them conducted online. Another paper focused on the informalisation of dispute settlement mechanisms by state bodies dealing with conflicts between elderly parents and their adult children. A third paper explored the concept of open prisons, where the state engaged in reformatory and counselling-based mechanisms to tackle the prison sentences of long term prisoners and the final paper looked at the boundaries between state and non-state actors.

The discussion framed questions on whether informalising methods of conflict resolution, in locations such as tribunals for the elderly or Lok Adalats, was an intentional effort of the state. Another question that sought attention was about how equipped the state is to deal with the diverse range of people (LGBTQI, religious minorities, etc.) who approach it and whether informalisation is a result of the same. Everyone in the panel seemed to however agree that no access to justice can never be better than any access to justice.

Panel 4: State and Non-state: Working with Boundaries and Binaries?

This panel was meant to be a plenary panel of sorts that would enquire into the theoretical context of this workshop raising questions about the use of concepts such as ‘state‘ and ‘nonstate’ especially to understand ideas of justice, the pursuit of which is always entangled in a mesh of activities that, as the previous panels showed us, were simultaneously state and nonstate. The discussions and papers from other panels revealed through empirical evidence how the boundaries between the state and non-state are porous and constantly shifting.

The papers in this panel revealed further how the non-state can be identified even within what is formally recognised as the ‘state legal system’. The multiplicity of forums for dispute settlement of course poses challenges but at the same time is empowering as in that, people have a choice of forums to choose from. As Lokur articulated: “It is the search for justice that leads people to different forums” and a logical corollary would therefore be that to take away this choice of forums would in turn lead to injustice of some kind. Solanki’s paper emphasised the need to draw multidimensional boundaries because the state and non-state are mutually interdependent. She however insisted on the retention of these concepts as they continued to be used among people both within and outside the system in order to identify the nature of disputes and conflict resolution mechanisms. Gupta’s work highlighted how the concept of legal pluralism has to move beyond the state: non-state dichotomy to include and embrace the interconnectedness between man and nature and the laws that this relationship manifests and is governed by.

The papers on this panel examined different forms of non-state conflict resolution mechanisms. While one paper discussed a religious tribunal in a metropolitan, the other paper discussed a mechanism in a rural setting. The papers provided an in-depth analysis of how these structures function, how they are used, the dynamics of gender and power within these forums and then what they mean in the broader context of understanding justice.

In the Panels 1, 3 and 5, a discussion about research methods was evident. In panel 5 in particular, given the difference in disciplines of the paper author and the paper discussant, the debates about research methodology and analytical lenses was very evident. One learnt how a specific disciplinary lens can direct research in a specific direction leading the author to conclusions very different from a researcher of a different discipline. In terms of the workshop, this was indeed a milestone moment. The study of conflict resolution has been rooted in different disciplines from the very beginning and an interdisciplinary engagement – although existent on paper – is always missed on a singular platform, given that workshops and conferences tend to be discipline focused on most occasions. Therefore, such engagements on methods and the limits of our disciplinary perspectives was indeed much needed and much awaited.

In the artist panel, we had several artists represent their ideas of justice. This panel had discussions from understandings of home and belonging, to discussions on propaganda and questions of gender equality

Map a Forum, a platform aimed to map non-state actors across India along with recording their locations, communities involved, methods of dispute resolution, adoption of adversarial or mediation processes, kind of laws that are involved, was also launched during the conference 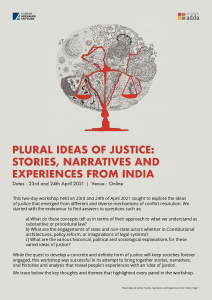