Madras Management Association(MMA) in collaboration with the India Office of the Konrad-Adenauer-Stiftung(KAS)presented a live talk through webcast on the theme, “Post-Pandemic World and India” by Mr. S Gurumurthy, Chartered Accountant, Columnist, Political and Economic Analyst & Editor, Thuglak magazine on Monday, 17 August 2020
19. August 2020 Bestellinformationen

The Covid crisis has put the whole world at the crossroads in terms of geo-politics, geo-strategy, geo-economics and geo-medicine. In all these sectors, there is both, cooperation and competition. India is in the midst of all of them at the global and regional levels and feels their impact nearer home. Where do we go from here and how?

Mr Peter Rimmele, Resident Representative to India of KAS delivered the introductory remarks. He stated that in the post-pandemic scenario, three things need to be discussed viz. Geopolitics, Trade and Health. As the world order changes, China’s role, the struggle for pre-eminence between US and China and how the nations position themselves in the new order assume significance, he said. Production shortages after the pandemic have led to nations looking for self-reliance, he pointed out and recommended a balanced approach between regionalization on the one hand and making the supply chains that have now become fragile, fit for the future, on the other hand.

Though Germany focused purely on national interests in the immediate aftermath of the pandemic, it soon embraced regional interests and it essentially operates on the principle of subsidiarity which is similar to India’s Panchayat Raj system, he pointed out. He lauded the efforts taken by India to combat the pandemic and its effects and in reaching out to its neighbours.

Mr S Gurumurthy began his address stating that as we are still in the midst of the pandemic, a post-pandemic world is, at the moment, imaginary. He juxtaposed the state of affairs of the world as of now with that of Spanish flu pandemic era. “The world has become more integrated now and therefore any crisis becomes contagious, more so the Covid pandemic,” he said.

He dealt elaborately on the origin of globalization, how China, a nation that teetered on the edge of collapsing from a serious famine, became a powerhouse, the world order in the post-cold war scenario, the collapse of the Soviet Union, the birth of Taiwan as an independent nation, the decline of US influence in geo-politics, the evolution of ‘Trump phenomenon’ and India’s likely role in a future world-order.

He quoted that the Foreign Policy Journal interviewed 12 experts and has reported that the world order post-Covid will definitely change but no one is sure if it will change for the better or worse. According to him, the short term is bleak and long term uncertain, which is very unusual. This is the time that all nations must come together to redress the situation but unfortunately, he regretted, the nations are falling apart.

China’s empire building instinct is still intact and its skirmishes in Ladakh region is more to distract India from focusing on its own growth, he felt. He came down heavily on the US and the West for making a blunder in undermining India’s abilities, perceiving it to be a weak nation and putting all their eggs in the basket of China, which is an autocratic, non-transparent nation, run on a model of Oligarchy where no single person or entity calls the shots and hence no one is accountable.

Thanks to Covid, the world is realizing the importance of India, he said and added, “India is needed by the world now more than India needs the world.” India’s biggest strength is its democracy and it is not its weakness, he stressed. He pitched for the West and India aligning to take on the might of China.  He foresees that in the new order, which may see order or disorder, all democratic and liberal democratic nations will be pitched against autocratic nations and globalization will cease to exist.

Group Captain R Vijayakumar(Retd), VSM moderated a Q&A session where questions from online viewers were taken up with Mr S Gurumurthy, at the end of which he proposed the vote of thanks. The event concluded at 7.30 pm 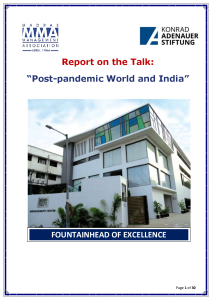