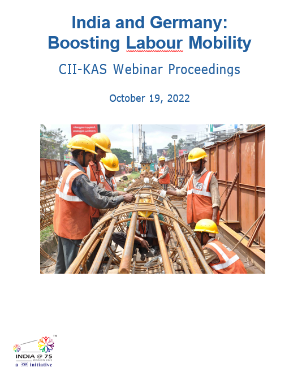 The Confederation of Indian Industry (CII) and the India Office of the Konrad-Adenauer-Stiftung (KAS) jointly organized the webinar on “India and Germany: Boosting Labour Mobility” on 19 October 2022, with the objective of exploring further avenues to enhance labour mobility between the two countries. 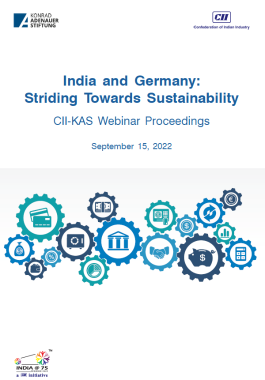 the Confederation of Indian Industry (CII) and the India Office of the Konrad-Adenauer-Stiftung (KAS) jointly organized the webinar on “India and Germany: Striding towards Sustainability” on 15 September 2022, to explore avenues of further cooperation between the two countries in the face of climate change. 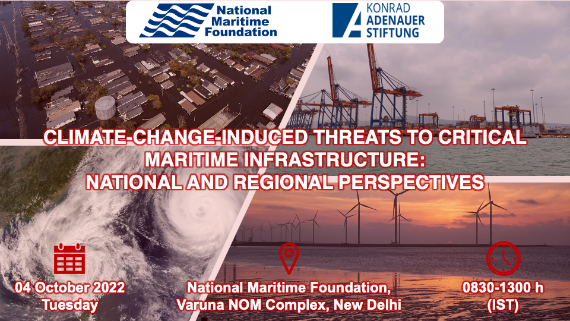 The National Maritime Foundation (NMF) and the India Office of the Konrad-Adenauer-Stiftung (KAS) jointly organized the half-day symposium entitled "CLIMATE-CHANGE-INDUCED THREATS TO CRITICAL MARITIME INFRASTRUCTURE: NATIONAL AND REGIONAL PERSPECTIVES" on Tuesday 04 October 2022. The event was conducted in physical format with virtual participation from international speakers.

Virtual closed door roundtable event held under Chatham House rule. This roundtable was a continuation of engagement of Kubernein Initiative (KI) and the India Office of Konrad-Adenauer-Stiftung (KAS) to understand opportunities for India to bring an inclusionary lens to various areas of foreign policy. Multilateral engagement is an important avenue for such an endeavour. Further, seven countries in the G20 group have announced or are working towards feminist foreign policies. The objective of this closed-door discussion was to gain a broader perspective on the various intersections for gender within the G20 framing including: ● Identifying key opportunities and challenges for India, in setting the agenda for its upcoming G20 presidency. ● Understanding where an inclusive perspective may be brought in to the G20 workings. o If the agenda of India’s G20 is inclusive development, what does inclusive mean in practice? o G20 countries coming together, interact along foreign policy axes. Can gender then be incorporated as a cross-cutting feature of shared G20 principles? o How do the Women 20 (W20) outputs integrate with the multilateral reach/influence of the G20? ● How can some of the core ideas of FFP/gender mainstreaming aid a potential W20 discussion? What are the key areas of engagement that can buttress both the W20 and bring about meaningful engagement in the G20 as well? ● Developing actionable policy recommendations that can ultimately lead to a more inclusive G20. 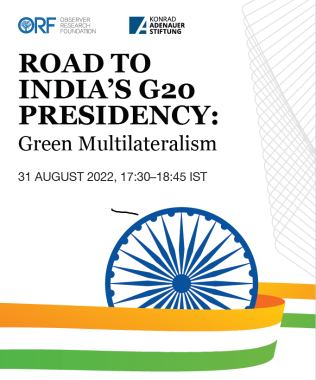 The G20 and G7 have recognized the importance of collective action to address challenges related to the environment and climate change. The G20 has acknowledged the close nexus between climate and energy, thus underlining the importance of just energy transitions, reducing global emissions, and enhancing adaptation to climate change. Similarly, the G7 has called on the global community to leverage the synergies between climate and biodiversity action, clean energy transition, and environmental protection to inform long-term transformative change. Both G20 and G7 have committed to further the achievement of the 2030 Agenda for Sustainable Development Goals, the UNFCCC, and the Paris Agreement. Furthermore, the G7 has initiated the discourse on establishing an open, cooperative international “climate club”, which is consistent with international rules. However, several challenges lie ahead of the road toward ensuring ‘green’ multilateralism. Given the intertwined nature of governance frameworks for international trade and climate change, the implementation of national policies for climate change, such as the Carbon Border Adjustment Mechanisms (CBAM), may amplify the tension with the existing trade regime. The lack of a global policy framework on carbon pricing mechanisms poses another challenge for a collective global climate action plan. Additionally, the mobilization of large-scale finance for addressing climate change is a serious concern for emerging and developing economies. What role can International Financial Institutions (IFIs), together with national governments and national development agencies, play in incentivizing and unlocking private climate financing to facilitate an economy-wide transition in developing countries? Is the carbon pricing mechanism a feasible solution for developing countries such as India to mitigate climate change? Should multilateral groupings such as the G20 support the development of an international carbon price floor or a similar arrangement? Can a climate club help eliminate the patchwork of national regulations and accelerate international coordination on climate change mitigation? The Observer Research Foundation in partnership with the India Office of the Konrad-Adenauer-Stiftung (KAS) organised a closed-door roundtable titled “Road to India’s G20 Presidency: Green Multilateralism” on 31 August 2022, at 17:30 IST. This session aimed to explore the challenges and solutions towards ensuring a coordinated approach toward green multilateralism. Furthermore, it aimed to develop key recommendations for India’s G20 presidency. We hope that through these convenings, Indian policymakers and their German counterparts can identify key mechanisms that would help initiate further international cooperation, find common ground on points of contention, and work towards policies that enable green multilateralism. 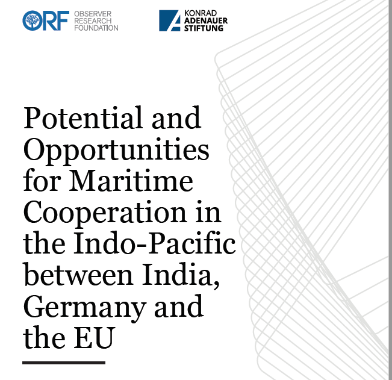 Potential and Opportunities for Maritime Cooperation in the Indo-Pacific between India, Germany and the EU

Ensuring a free, open and a rules-based order in the Indo-Pacific has become a major policy priority for countries of the region. The Indo-Pacific region generates 60 per cent of global gross domestic product and is linked to Europe through transregional production networks and supply chains. With an economy slated to be the world’s third largest by 2030, a population projected to be the world’s largest by 2027, and two strategic coastlines at the heart of the Indian Ocean, India holds the potential to be the European Union’s most important partner as Europe seeks to balance its relations with China while securing the expansion of its engagement with the countries of the Indo-Pacific. While the Indo-Pacific is not a region that is of immediate geopolitical relevance to Germany, the interconnected nature of global commerce ties it inexorably to geopolitical concerns with any disruption of the latter directly standing to impact the former. The German government has billed the guidelines as a coherent effort to reorient its foreign and security policy approach to the strategically important region that has become increasingly vital to the country’s national interests. As Germany’s former Minister for Foreign Affairs Heiko Maas put it “The Himalayas and the Strait of Malacca may seem far away. But our prosperity and geopolitical influence in the coming decades are also based on how we work with the states of the Indo-Pacific.” Both Germany and the EU’s Indo-Pacific policy document acknowledges that the region is increasingly characterized by and consequently, susceptible to shifts in power equations with there being divergent interests and aspirations of countries comprising it. As an advocate of the rules-based international order, their interests lie in its participation in the region’s growth and the protection of regional structures. The need for the maintenance of freedom of navigation, territorial sovereignty has been underlined as well. Towards this end, for instance, the navies of India and Germany carried out a joint exercise in the Gulf of Aden near Yemen in August 2021, earlier this year in January 2022, a German frigate FGS Bayern made a port call to Mumbai as part of its seven-month deployment to the Indo-Pacific region. India has similar interests like Germany and the EU in a free and open Indo-Pacific and security of its maritime trading routes. Therefore, how does the German and the EU Indo-Pacific policies stand to impact the dynamics of the Indo-Pacific region? What are the potential areas that India and Germany alongside the EU can work together to ensure a stable and rules-based order in the Indo-Pacific? How would they gain from this cooperative arrangement? Against this background, the Observer Research Foundation, New Delhi in collaboration with the India Office of the Konrad-Adenauer-Stiftung is holding a series of roundtables. The first in the series will look into the potential areas of cooperation between India, Germany and also the EU in the maritime domain to ensure a stable, free, open and a rules-based Indo-Pacific. The Indo-Pacific is essentially a maritime geography, and hence there is great potential for countries to work together in the maritime sector. Some of the areas where collaboration can take place are maritime domain awareness, marine economy, capacity building in third countries or region like Southeast Asia, helping island nations of the Western Indian Ocean in preparing for natural disasters and humanitarian assistance. Experts from India, Germany, other EU countries and the ASEAN will come together to discuss about the above possibilities as well as how can both India, Germany and the EU benefit from this partnership and reap strategic advantage in the Indo-Pacific region. 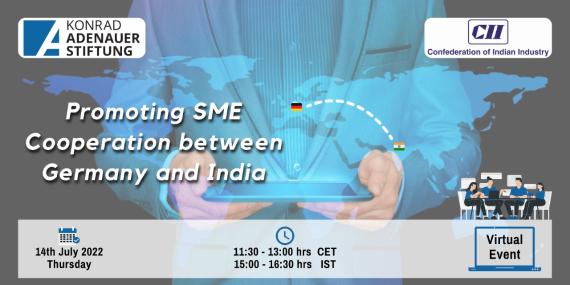 CII-KAS Webinar on “Promoting SME Cooperation between Germany and India”

CII together with the India office of the Konrad Adenauer Stiftung (KAS), organised a webinar on “Promoting SME Cooperation between Germany and India” to identify and promote targeted initiatives and programmes for enhancing cooperation to facilitate SMEs and their development across India and Germany. 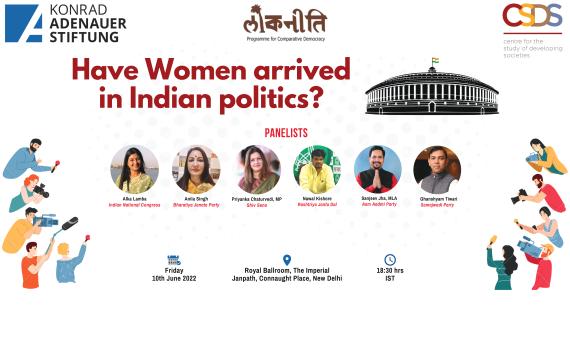 Panel Discussion on "Have women arrived in Indian Politics?"

The centre for the Study of Developing Societies and the India Office of the Konrad-Adenauer-Stiftung (KAS) organized a panel discussion on “Have women arrived in India politics” on Friday, June 10, 2022. The event aimed at discussing women’s changing participation in Indian politics, both as voters and as elected representatives. 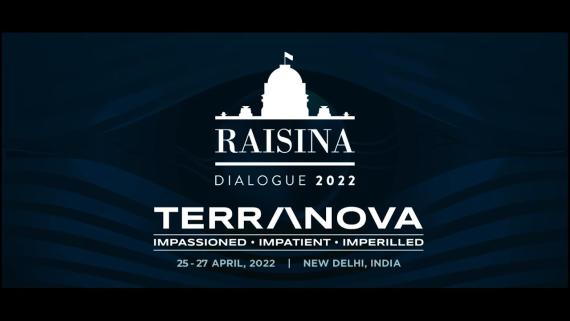 Once again, we have teamed up with ORF and the Indian MEA to organise this year's Raisina Dialogue entitled "Terra Nova: Impassioned, Impatient, and Imperilled." 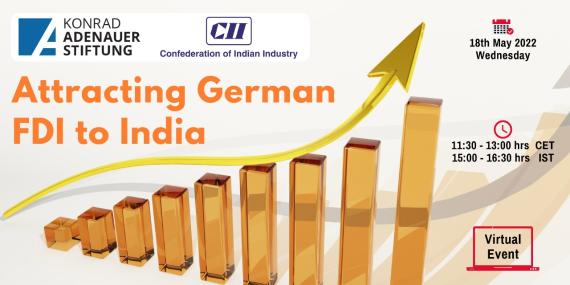 The Confederation of Indian Industry (CII) and the India Office of the Konrad-Adenauer-Stiftung (KAS) Foundation jointly organized the webinar on ‘Attracting German FDI to India’ on 18 May 2022.