The Malaysian Pull-Out from the International Monitoring Team: Implications and Responses

A roundtable discussion with several stakeholders of the Mindanao Peace Process to discuss the announced pull-out of the Malaysian contingent from the International Monitoring Team (IMT), which is responsible for monitoring the ceasefire in Mindanao.
21. April 2008

Last April 21, 208, the Malaysian Foreign Minster Rais Yatim announced that once the mandate of the International Monitoring Team (IMT) expires at the end of August 2008, his government will stop sending peace monitors. A Round Table Discussion was organized on May 6, 2008 at Estosan Garden Hotel, Cotabato city by the Institute of Bangsamoro Studies (IBS) and the Institute for Autonomy and Governance (IAG), with support of the Konrad Adenauer Stiftung, tackled the implications and responses of the Malaysian pull-out.

General Rodolfo Garcia, Chair of the Government of the Republic of the Philippines (GRP) Peace Panel, believes that there stability on the ground can no longer be guaranteed once the Malaysians pullout of the IMT. The majority of the troops of the IMT are Malaysian.

“The IMT provides support roles to the peace process…(and) ceasefire is significant that it has to be preserved to provide space to build confidence among conflicting parties…To sustain a ceasefire, an independent monitoring body is essential…to keep the negotiations going and to preserve achieved gains,” according to Prof. Abhoud Syed Lingga, Executive Director of the IBS.

In spite of all the good done by the presence of the IMT, “because there is a need for us (the Malaysians) to indicate that we cannot be there forever... both parties must work closely together to thresh out a peaceful solution, and to underline the seriousness of the situation, we have decided to withdraw some of our peace-keepers,” stated Malaysian Deputy Prime Minister Datuk Seri Najib Tun Razak to media. He also adds, “We need to show that we cannot and we should not be there as part of the International Monitoring Team indefinitely. There has to be some degree of finality in terms of our presence there.”

According to Prof. Lingga, implications of the Malaysian pull-out to the IMT are as follows: 1) Peace monitors will be reduce because around 70% were Malaysians; 2) No more peace monitors for Zamboanga del Sur, Zamboanga del Norte, Davao, South Cotabato, Lanao del Sur, Lanao del Norte, Sarangani, Tawi-tawi, Basilan, Sulu and Zamboanga Sibugay provinces; 3) Crisis response will now be more difficult; 4) The head of mission is downgraded, because he used to be a Malaysian Major General; and 5) Upon completion of the Malaysian pull-out, the mandate of the IMT will also expire. Thus meaning, unless the mandate is renewed by the GRP and MILF, the remaining contingents from Brunei, Libya and Japan will also have to leave. 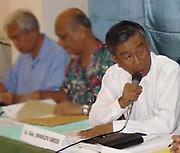