In September Germany released its Policy Guidelines on the Indo-Pacific and thus entered its bid to engage with this fast-evolving region and to shape the narrative accompanying it. Having acquired a stake in this global political enterprise, it will have to be prepared for close scrutiny of its activities in the seven key areas defined by the guidelines: multilateralism, climate change, security, rule of law, free trade, digitalization and education.
27. November 2020 Bestellinformationen

The Indo-Pacific Roundtable: a platform for open policy debate

The Konrad-Adenauer-Stiftung (KAS) and the European Council on Foreign Relations (ECFR) jointly launched a roundtable to initiate a political exchange with stakeholders from the German Bundestag, line ministries, embassies and policy think tanks. The event began with a short presentation by KAS and a comment from France by ECFR on how Germany’s new approach is perceived in Europe and in the region. The speakers then discussed the expectations of partners in the region and the political steps necessary to uphold the commitment made by the guidelines. The virtual roundtable was held under the Chatham House Rule.

As Germany’s guidelines state the goal of providing impetus for a common EU strategy on the Indo-Pacific, the discussion opened with a French perspective on Germany’s ambitions. Whereas Germany’s policy paper was warmly received in Paris, it was stated that France would prioritise maritime security and the protection of economic interests through more resilient supply chains.

With some observers in Paris viewing the guidelines as having a “shopping list” character, France would also see the need to flesh out the strategic elements in more detail. Similar sentiments were reflected in a survey among KAS regional offices, which was presented at the start of the session. It showed that KAS representatives in the Indo-Pacific assessed the guidelines as concrete and future-oriented, but only moderately courageous.

Speakers from the Bundestag, the Foreign Office and the Federal Ministry of Defence highlighted three overarching policy directions of Germany’s Indo-Pacific activities. First, Germany’s aim was described as strengthening like-minded alliances and drawing on genuine multilateral cooperation to shape the political modus operandi in the Indo-Pacific. Rather than building plans to exclude and decouple from China, Germany’s approach would rely on inclusion and diversification.

Second, to make an impact Germany would need to follow clear principles and communicate them with confidence. In this context an incongruity was highlighted in China’s assessment of Germany’s Indo-Pacific policy: if Beijing viewed the policy as a containment effort against itself, it would concede its reluctance to adhere to the standards formulated in the guidelines.

Third, the speakers identified a high demand for security cooperation among Indo-Pacific partners. In order for Germany to be perceived as a credible and reliable partner beyond trade, it will need to take security concerns in the region seriously – and contribute more to the protection of vital economic corridors. Senior Officials unequivocally stated that Germany will formulate and implement concrete policies to strengthen mutually beneficial security partnerships.

In the exchange with other participants a few contentious issues stood out. One participant raised the question of how Beijing might be convinced that Germany’s Indo-Pacific activities were not directed against it, notwithstanding Germany’s insistence on inclusiveness and being guided by principle. Here the need for coherent communication and principled policy action became especially clear.

Another challenge was found in consolidating the existing French, German and Dutch policy papers into a joint EU approach by defining mutual interests and values. Finally, it was pointed out that Germany’s commitment to the Indo-Pacific is contingent on support from the German public, businesses and, most crucially, on the active engagement of the Bundestag. All of the above underlined the need to institutionalise the debate on Indo-Pacific policies across Germany’s policy-making and governing bodies.

For KAS and ECFR the first session of this Indo-Pacific Roundtable reaffirmed the need for a continuous and expedient debate on Germany’s goals, capacities and concrete actions in the Indo-Pacific. The implementation of the guidelines should be publicised with confidence and discussed with both decision-makers and the public.

Both KAS and ECFR wish to make a contribution to Germany’s progress in building stronger security ties with Indo-Pacific partners, converging policies at a European level and taking the debate further within parliaments and among the German public.

In the spirit of inclusivity, the organisers will strive to bring together representatives from the Indo-Pacific as well as European partners to future sessions of this roundtable format. Only by upholding the political momentum a pan-European approach and a new quality of ties with Indo-Pacific partners will be within reach. 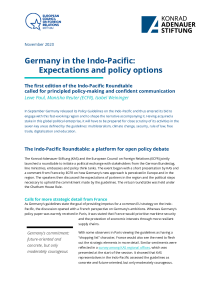 Germany in the Indo-Pacific
Herunterladen
Ansprechpartner 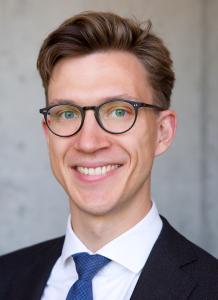