… (he) who has succeeded in the great attempt

To be a friend's friend…

add him to the jubilation;

…and whoever never could achieve this,

Let him steal away crying from this gathering!

In 1972, when the European community consisted of only 6 Western European countries, the Committee of Ministers of the Council of Europe decided that the Beethoven’s Ninth Symphony, inspired by the eponymous Schiller’s ode, should be the anthem of the united Europe. Why did they make this decision? Was it a solely symbolic step or did they know back then that one day this project will really be able to create a situation in Europe where as Schiller wrote “All men (have) become brothers”?

Indeed, each anthem reveals and represents what truly underpins the community, which inhabits this particular part of the planet. The European Union is no exception in this sense and even though the anthem is played without lyrics, the influence of Schiller’s ode is ever present every time when the anthem of the united Europe is played. So with the help of Schiller’s “Ode to joy” we make an attempt to explore the reasons to an ever relevant question of what exactly underlines the EU what makes states enter or stay out of this community of peoples.

Reading the Schiller’s masterpiece, one can’t but mention one particular topic recurring time and again in the lyrical verse which could be labeled as the desire for peace. “You millions, be embraced” was made by Beethoven to be repeated several times throughout the lyrics in the original’s symphony, which clearly expresses author’s aspiration for universal peace and freedom. There is absolutely no exaggeration in saying that the strong commitment of achieving everlasting peace on the continent has been and highly likely will remain to be the main driving force of the EU for years to come. It is no coincidence that the founding countries of the European project were the ones who suffered from the devastation of the two World Wars the most. Looking back at one of the first steps on the road to the EU, the Treaty of Paris on establishing the European Coal and Steel Community (1951), which is believed to have eliminated the risk of unexpected and unilateral militarization, only substantiates this point of view. It is also not for nothing that the European Union was awarded with a Nobel Peace Prize in 2012, which underlined a more than a half a century of peace on the continent achieved thanks to this integration project.

Having said that, however, one can’t help but ask oneself, why aren’t all European countries not in the EU then? After all, a desire for peace and willingness to live side by side as friends seem to be so natural today. The answer to this problem lies in the fact that at some point, as the European Union started to evolve and developing in-depth, the idea of building peace together turned out to be rather a stepping stone for further integration instead of some sort of an idée fixe. This does not mean however that European peace building has sunk into irrelevance for the EU. On the contrary, it still remains to be an integral part of the whole European project, which is exemplified by a recent PESCO initiative , which aims specifically to build a more secure and independently stable Europe than ever before. Therefore, one can argue that however crucial peace and security building in Europe today is, nowadays it has transformed into a “first among equals” aim, which plays a complimentary role in driving countries in the European community.

But what are those other “equals” in the EU then, which attract or deter countries of the continent from joining or staying out of it? Referring back the Schiller’s piece, we are finding further answers to this question. There’s desire for justice and rule of law from the participants of this community in the words “truth towards friend and foe”, respect for human rights in verse “mens’ pride before kings’ thrones”, strive for installment of democratic principles in line “the crowns to those who earn them”, and, most importantly, overarching concern of adhering to these common values in “remaining true to the vows”. Indeed, values are continuing to play a fundamental role in keeping the whole Union together and projecting its power outside. But why, for instance, we ask, Switzerland or Norway are not in the European Union then? Don’t they share the same values with other European countries? Or why, on the other hand, numerous straight-out-of-communism Eastern European countries were accepted to the EU back in 2004? However disappointing the answer might be, but there seems to be no clear answer to this question, due to the simple reason that to date there are still no Maastricht-like criteria for convergence of values. Hence, Czechs or Estonians may well be more European in their values than Swiss or Norwegians after all, since there is simply no way of proving the opposite assumption wrong. And why is it so? What are those European values anyway?

In my opinion one of the most underlining European value, which has its roots in Christianity, is connected with sacrifice. Therefore, those states that are ready to sacrifice their own individual goals for the sake of others, for the sake of something bigger than they are, could rightfully be called European. Henry Kissinger in his famous book “World Order” talking about the history of the European Union wrote: “…so committed was Adenauer to the unification of Europe that he rejected, in the 1950s, Soviet proposals hinting that Germany might be unified if the Federal Republic of Germany abandoned the Western Alliance European project”. There is no secret that the unification of Germany has been one of the most crucial questions since the day one of the FRG, and yet the new German leadership knew that the European integration project will never succeed if countries won’t be ready to put community’s interests in front of their own. The example of the United Kingdom leaving the EU shows what happens when this logic is ignored. London for years has been showing the inability to make sacrifices by staying out of both Eurozone and Schengen Area altogether, hoping to cherry-pick the best of the integration project and avoid putting Brussels’ interests in front of the London’s one. Hence, in order to function effectively the European Union must get something in return from its member states, otherwise, those who fail grasp this simple logic, as Schiller pointed out, shall “…steal away crying from this gathering!”

Another important thing to understand here is concerned with the fact that after the WWII Europe was standing on the threshold of the irreversible “Tragedy of Europe” as Winston Churchill dubbed it in his famous speech at the University of Zurich in September 1946. He argued that the continent will never be able return to its once high positions if everybody continues to pursue their own agenda regardless of their neighbors’ interests and concerns. Nowadays, as Europe faces a new host of numerous global threats and challenges, the message of Sir W. Churchill remains to be as relevant as it was 70 years go. Hence, it seems to me that if European countries want their concerns regarding international affairs to be heard it is the only logical for European states to be within the European Union, which has developed a comprehensive mechanism of articulating European vision on the ever increasing range of issues on the international agenda. Apart from the national embassies, the EU countries have the representatives of Brussels in almost every part of the planet making sure the voice of all European people is heard. Be it in the JCPOA on the Iran nuclear issue or problems of Sahel region, the European diplomacy empowered by the European External Action Service (EEAS), presents a unique opportunity for Germany and Luxembourg, France and Malta etc. be equally heard in the word arena today.

Furthermore, the reason why some countries are in the EU and others are not is closely entwined with the fact that the EU provides a comprehensive opportunity to its member-states to solve their domestic problems. The examples of Southern European countries in the 1980s or Eastern European states in the 2010s vividly demonstrate how in a matter of several years the EU incentivized governing bodies of these countries to switch from authoritarian methods to progressive democratic institutions in politics and replace the planned economy by the market one. The EU accession, however, should not be regarded as a universal pill from all political diseases. As the recent example of Hungary shows, these positive developments can be overturned just as fast, especially if the decision making process on such a delicate matter is exacerbated by such an acute crisis as a refugee one.

The European integration project also lets countries on the borders of the Union to carry out a responsible and forward-thinking neighborhood policy by contributing to the prosperity and well-being of states surrounding the European Union. The above mentioned Norway, for instance, whose population has rejected entrance into the EU twice already, has a comprehensive framework of agreements with the EU in place which, inter alia, allow citizens of Norway travel to the Schengen countries without any restrictions and vice versa. When it comes down to fishing industry however, policy makers in Oslo clearly do not quite see eye to eye with their counterparts in Brussels. Nonetheless, the EU and Norway continue to cooperate together on the handful of issues even with the latter formally staying out of the Union. The example of the Eastern Partnership or the Union for the Mediterranean are also substantiating this argument but the main takeaway here should be that the EU is quite effective in facilitating member states in building trust and cooperation with its neighbors, from which the whole continent benefits.

In conclusion, I would like to reiterate that the question of why some countries decide to join the EU is not just an interesting topic for contemplation for Europeans but rather an existential one. Now, as we understand that the EU is responsible for some many things on the continent today –from global peace and security to domestic governance based democratic values – we can’t let this unique integration project show any further signs of weakness. “Returning to the roots” of the European integration project by reading Friedrich Schiller’s brilliant poetry or examining once again political endeavors of Robert Schuman and Konrad Adenauer can with no doubt help us remind ourselves how important and unique the European Union is and why so many different countries decided to abandon a part of their sovereignty for the sake of this community of peoples. 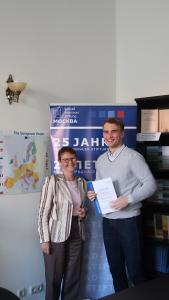