Progressive Reform in the New Constitution of Zimbabwe:

Preservative and Transformative Constitution Making Process - The aim of the Lancaster house conference was to bring to an end the armed struggle that had raged for 2 decades between the colonialist settlers and the Indigenous Zimbabwean people. The nature of the conference was largely diplomatic, at least from the Britons side to such an extent that dialogue was open between every party in the then Rhodesia which explains Ian Smith’s UDI being also present. Some of the issues discussed during the Conference included, the land issue, free and fair elections, (also available as pdf)
17. Februar 2015 Bestellinformationen

The aim of the Lancaster house conference was to bring to an end the armed struggle that had raged for 2 decades between the colonialist settlers and the Indigenous Zimbabwean people. The nature of the conference was largely diplomatic, at least from the Britons side to such an extent that dialogue was open between every party in the then Rhodesia which explains Ian Smith’s UDI being also present. Some of the issues discussed during the Conference included, the land issue, free and fair elections, composition of the army, judiciary, police and the position of the white minority, thus the resultant negotiated document from the Conference was to be known as the Lancaster House Constitution. The Lancaster House Agreement was signed between the parties in December 1979, ending the civil war and paving the way for independence. Within a year, independence was granted and elections were held. The Lancaster House Constitution maintained the Bi-cameral legislature that was in place before the coming of independence. The Lancaster House Constitution provided for a justiciable Bill of Rights and a number of provisions were entrenched effectively, with a clause ousting the power of the legislature to amend provisions for several years for instance property rights. The motive behind this restriction was of course to ensure that the negotiations of the Lancaster House conference are not overtaken by the inherent power of the newly independent sovereign Zimbabwe to alter and shape its founding documents which would render the deliberations and resolutions agreed upon nugatory. What is apparent is that the colonial regime was only ready to grant conditional independence and ironically imposed a constitution on the masses that had not involved the views of the people in the constitution making process.

A non-executive president was introduced with the executive power vesting in the Prime Minister and Cabinet Ministers. The 1980 constitution was a document established through an Act of the British Parliament and given to Zimbabwe rather than a product of an inclusive participatory process. As such, it naturally established the Westminster style system, whose hallmark was the supremacy of the parliament over the executive. Furthermore, the constitution, though designed to end the autocratic and undemocratic rule that prevailed under the Smith UDI regime, preserved two fundamental features of the colonial period: unequal distribution of land ownership between blacks and whites and white dominance. This configuration eventually provided the black majority government with the ammunition to challenge and initiate substantial amendments to the 1980 Charter. Up until its repeal there were 19 Constitutional amendments to the Lancaster House Constitution with the most notable being the amendments forming the Inclusive Government. Some of the amendments have been necessitated by the need to create a Constitution that reflects the values and opinions of the majority notably the Constitution of Zimbabwe Amendment (No.17) Act signed into law on September 12, 2005 which sought to redress the land imbalances of the past. Such imbalances created through legislation such as the Land Apportionment Act of 1930 and the Land Tenure Act of 1969, which prohibited blacks to own land in white areas. Other notable amendments were the removal of reserved white seats in senate, removal of the Prime Minister and non-executive Presidency forming an executive President. The most memorable amendment was one which ousted the jurisdiction of the courts to entertain matters pertaining to land that had been compulsorily acquired by the state

Other amendments have been criticised on the grounds that they were facilitated by the need for power or need to gain more political control as opposed to catering for the will of the people. The underlying factor is that the Lancaster House Constitution was imposed on the Zimbabweans by the British when it is a trite principle of constitutionalism that the document is supposed to be a manifestation of the will of the masses made by the masses for the masses, this amongst other factors being the reason why the document is regarded as the supreme law of the land. For the above reason the Lancaster House constitution was invariably going to be amended let alone repealed, it did not reflect the will of the sovereign and was a liability. It had chained down the precepts and tenets of law reform and had short-changed the hard won gains of the liberation struggle. The Lancaster House Constitution was simply a sugar coated abrogation of the principles of rule of law and constitutionalism, a tool for neo-colonialism.

The Lancaster House Constitution was repealed with the coming of the new constitution Amendment Act NO. 13 of 2013 on 9 May 2013. This was a result of the quantitative changes that had been occurring in Zimbabwean politics the first hint of such being the draft constitution of 2000, which saw a proposed constitution being abandoned after it failed to attain approval at a referendum. Seven years later in 2007, ZANU-PF and the two factions of the MDC party, came together and proposed another constitution christened the Kariba draft which was rejected for failing to accommodate public participation in the process and the fact that it was a secretive process and though the deficiencies of the Lancaster House Constitution were agitating for reform the people of Zimbabwe were not willing to repeat the same mistake of condoning a document which they had not authored to govern their rights and responsibilities.

Tawana H. Nyabeze is a senior law student at the University of Zimbabwe, Harare. 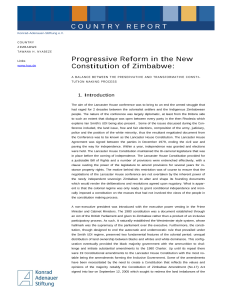 Progressive Reform in the New Constitution of Zimbabwe_ (Pdf)
Herunterladen