The Political and Social Impact of Prophetic Churches in Zimbabwe

A casual google search of prophets in Zimbabwe reveals hundreds of thousands of articles. Several of these are newspaper articles from the past five years. Hardly a day goes by without an article about prophets and their activities being written. This paper will use the term prophet as it is widely used in Zimbabwean media, however a more biblical understanding of the term will be given in the section on Christian understandings of the prophetic phenomena today.
30. Oktober 2014 Bestellinformationen

The Political and Social Impact of Prophetic Churches in Zimbabwe

A casual google search of prophets in Zimbabwe reveals hundreds of thousands of articles. Several of these are newspaper articles from the past five years. Hardly a day goes by without an article about prophets and their activities being written. This paper will use the term prophet as it is widely used in Zimbabwean media, however a more biblical understanding of the term will be given in the section on Christian understandings of the prophetic phenomena today.

The prophetic activities that are reported range from the bizarre to the outrageous and sometimes immoral or even criminal. Bizarre claims of being able to make a person pregnant and deliver a baby in three days (“Harare Woman: I had a Miracle Baby,” 2013) or being able to produce miracle money which appears from nowhere and is found in one’s pocket or bank account (Nyoni, 2013) are the order of the day. Outrageous and perhaps irresponsible claims abound. For example, highly ranked Nigerian Prophet T.B. Joshua is said to be able to cure incurable diseases like HIV or cancer and recently he took the bar even higher when he claimed to be able to cure Ebola through holy water which he sent to Sierra Leone by private jet (Griffin, 2014; Blair, 2014). Stories of church leaders having sexual relations with several women in the church; being in polygamous relationships and even raping women are not unusual (Rupapa, 2014; Ndaba, 2014). Reports of a prophet being able to perform miracle abortions are confusing to say the least (“Prophet performs ‘miracle’ abortion,” 2013).

Zimbabwean political leaders’ interaction with the churches has been influenced by political expediency and utilitarian motivations. These church leaders command large followings and their constituency is tapped into for various motivations. President Robert Mugabe enjoys a symbiotic relationship with what is called the Apostolic church (Mapostori) in Zimbabwe. Mapostori are a syncretistic church in Zimbabwe, mixing traditional African beliefs with Christian teachings. This group has pledged loyalty to President Mugabe and ZANU PF, his party; instructing all adherents to vote for his party in the past election (Kuvirimirwa, 2013) and pledging to support and help him and his party win the next election in 2018 (Dembedza, 2013). As an outcome of this relationship President Mugabe spoke to a group of over one hundred thousand Mapostori at the Johanne Marange Apostolic Church during his campaign before the last elections (ZANU PF Team, 2013). This was a strong endorsement for the Mapostori by the President.

Another example of political interaction with the prophetic churches is the desire of the Minister of Tourism to use the popularity and crowd-pulling ability of the churches to create a market for religious tourism. He hopes that by 2020 twenty-percent of Zimbabwe’s tourism earnings will come from religious tourism, much of that would be from prophetic churches. He argues that sixty percent of tourist arrivals in Nigeria visit T.B. Joshua’s church (Mangudhla, 2014) and would like to see similar inflows in Zimbabwe.

The high level interaction of prophets with political leaders is notable. Zimbabwean prophets Makandiwa and Angel have been invited to private meetings with national leaders like the late Nelson Mandela (Mutsaka, 2012) and Vice-President Ruto of Kenya (Staff Reporter, 2013). These are examples of a few world leaders who meet with these prophets it would seem for some spiritual help or guidance.

A characteristic of the modern day Zimbabwean prophet in contrast to the prophets of the traditional and more syncretistic apostolic churches (mapostori) is the extravagant lifestyles. A Zimbabwean newspaper report claims five of the ten richest pastors in the world come from Nigeria (Entertainment, 2014). These pastors enjoy luxuries like owing private jets in a country where more than seventy percent live on less than US$1 a day (Oguntola, 2012). West African prophets are often referred to and sought as “spiritual fathers” to use the prophets’ terminology, by Zimbabwean prophets. The rest of the paper will attempt to explore anthropological and Christian reasonings to explain the phenomena described in the diagram.

This worldview can be described as animistic. A Western mind might better understand this as a shamanistic world view. A shaman is a person who can access the spirit world, interact with benevolent or malevolent spirits in that world and then work with them to influence affairs in this world whether for good or bad. In the African world nothing happens by accident or coincidence, spiritual forces affect life on earth. Death is understood as a transference from this world to the world of the departed ancestors. Those departed spirits can be accessed, communicated with and are actively involved in life on the earth. They are accessed by religious specialists. Ultimately everything that happens on earth derives from the ancestors, spirit powers and gods.

In this structure which is a life-flow that must be maintained for harmonious existence with the natural and spiritual world, those that are lower in the hierarchy must respect and serve the ones that are higher. However even the soil must be respected, after all this is where the bodies of those who die are laid.

Zimbabwe’s war of liberation was spiritually understood as a type of holy war to return the sacred land to the ancestors from whom it had been taken (Mutonono & Mautsa, 2006 p. 290). The ancestors would then aid the fighters in battle, and even to this day ancestral veneration is given for liberating Zimbabwe. In the same way of thinking, recent newspaper reports say that Zanu PF, the ruling party is seeking guidance concerning the countries political problems and the identity of Mugabe’s successors from spirit mediums. This is best described as esoteric shamanism; leadership based on mysterious spiritual guidance which is given to and understood by a few (Kunambura, 2014 & Mushava 2014). This was the type of leadership employed by primitive cultures of the world and has generally been replaced by modern governance systems.

Christian Understandings of the Prophetic Phenomena

Christianity’s encounter with African culture started in the early centuries and early African theologians shaped Christianity as we know it today (Oden, 2010). However, Christianity in modern Africa largely came through Western missionary efforts. Most Christian teaching from the West was influenced by the age of reason, secular humanism and the scientific advancements of those times. Liberal theology which rejected the supernatural had gained acceptance. Christianity as it came through the missionaries therefore lacked spirituality.

The African, on reading the Bible immediately saw a disconnection between the Christianity taught by the missionary and biblical experience. The Bible is full of miracles and supernatural encounters, a spirituality the African was more familiar with. People like Johanne Masowe who founded the Gospel of God church also known as Mapostori ekwa Masowe broke away from the traditional churches to form the Mapostori (Apostles) churches, modelled after the biblical apostles who performed miracles and accessed the spirit world, getting guidance from God. These churches are a mixture of African Traditional Religion, and Christianity but with Old Testament practices being prominent (Reese, 2008). Old Testament practices and culture are closer to African traditional culture. Masowe, Marange and Mwazha are some of the more prominent sects that started during the early and mid 1900s and they have a very significant following in the nation; some statistics indicate that they make up about fifty percent of what is termed Christian in Zimbabwe. In their efforts to do what the biblical apostles did and perform miracles, the mapostori tend to rely on African traditional methods of accessing the spirit world. The mapostori prophets who access the spirit world are notoriously able to switch from being a prophet to a traditional healer overnight.

The other manifestation of the prophetic that we see in the African context is largely related to the Pentecostal movements’ understandings of spirituality. The modern Pentecostal movement which largely came through the United States in the past century resonates with African spirituality, thus the great African attraction to this form of Christianity. The tendency of African Pentecostalism to gravitate towards African Traditional Religious world views is bringing some of the imbalances and excesses that cause confusion in African Christianity.

There are however several churches and Christians in the Zimbabwean context who are making efforts to give a reasoned and sober understanding of Christianity. African Christianity unlike expressions of Christianity when it was dominant in the West has not penetrated deep enough to affect values, behaviour and world views. In the Western world when Christianity was dominant it influenced culture to the level of determining how countries are led, and what principles govern society and day to day life in all spheres. The African church needs to go through that journey and not be content with just filling church buildings with people and even leaders who largely minimise and ignore the major biblical emphases which have to do with the moral and ethical aspects. These aspects confront values and behaviour resulting in culture transformation. The emphasis on the tantalising quest for miracles and supernatural intervention which immediately solves crises needs to be balanced with the appreciation that God can work through properly managed nations and institutions to solve some of the problems of life. While it might be possible that God can heal ebola through holy water or in another spectacular way, and people should be free to try that if they so wish; our countries if they were well run with godly principles, would, like the United States use God-given brains in the populace to develop a drug that cures ebola. African Christianity can potentially bring back a Christian spirituality with miracles to the world because of African spiritual sensitivity. This must be balanced by the sound theology that African Christianity was known for in the early centuries. This will avoid the excesses of charlatans and wizards masquerading as prophets.

•Kunambura, A. (2014, September 18). Will spirit mediums save Zanu -PF? The Financial Gazzette. Retrieved from: http://www.financialgazette.co.zw/will-spirit-mediums-save-zanu-pf/

Nonimous Hameno is an independent Zimbabwean political writer and analyst. 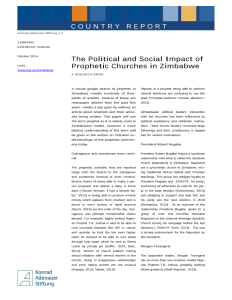