THE demonetisation of the Zimbabwe dollar will begin on June 15 and end on September 30 the Reserve Bank of Zimbabwe (RBZ) said on Thursday.RBZ said after September 30 bank notes that would not have been exchanged shall be considered demonetised or decommissioned.In a statement, RBZ Governor John Mangudya said the process will deal with all non-loan bank accounts as a December 31, 2008 as well as cash held by the public.
26. Juni 2015 Bestellinformationen

Mangudya said this policy intervention was necessary to buttress government’s commitment to the multiple currency system dispelling rumours of a Zim dollar return.

“Cash holders can exchange their holdings at any bank, building society, POSB and Zimpost…The banking public should visit their banks to establish the balances which were in their accounts. We have interacted with banks and they still have all the information, which we as the Reserve Bank also authenticated,” he said.

RBZ said it will exchange ZW$ cash for US$ equivalent for walk in customers at an exchange rate of US$ 250 trillion to US$ 1 for 2008 notes and ZW$ 250 to US$1 for 2009 note series. “Cash payouts under the demonetisation process shall be exempted from bank charges and Government tax. Payouts will be disbursed on a ‘no questions’ asked basis. The bank has already discussed the payment modalities with the banks,” said Mangudya.

He said banks will accept all notes with or without value from customers on behalf of the Reserve Bank Zimbabwe.

The exercise will cost US$ 20 million. 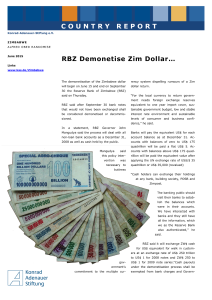