How Corruption Erodes Healthcare in Iraq

In April and July 2021, two hospital fires in COVID-19 wards in Baghdad and Nasiriya left 174 Iraqi citizens dead and 210 injured. The deadly blazes made headlines across the world, but for many Iraqi citizens, the fires represented the culmination of a failed pandemic response and years of decline in the healthcare sector.
14. Dezember 2021 Bestellinformationen

The April and July 2021 hospital fires in Nasiriya and Baghdad left hundreds dead, adding insult to injury for a medical system that had already buckled under the weight of the COVID-19 pandemic. Why did these deadly fires transpire? In the media, journalists highlighted a lengthy series of contributing factors leading to the tragedy, including flimsy and highly flammable construction materials, the explosion of mismanaged oxygen tanks, electrical shorts, and a lack of fire safety equipment. Underlying these defects, ordinary Iraqis pointed to a deeper cause: pervasive corruption in the healthcare sector. Corruption, they alleged, explained why it was that an oil-rich country had not built and maintained safe and secure health facilities. These claims echoed the discourse of the Tishreen protests that erupted across Baghdad and the South in 2019. In protest after protest, demonstrators alleged that political parties consolidating power in the wake of the US-led invasion had preyed upon Iraq’s public and private sectors alike, engaging in forms of graft that gradually allowed the parties to shore up support of loyalists while also undermining equitable access to the very public institutions and private markets they controlled. Drawing the link between corruption and health deficits, groups of cancer patients entered Tahrir Square alongside other Tishreen protesters and carried signs that read, “Corruption stole my treatment.” With the deadly fires in COVID-19 wards during recent months, such sentiments have again surfaced into public view. How should scholars and policymakers make sense of these claims? Previous research has argued that corruption in Iraq is not best understood as an anomalous set of illicit transactions but rather as a structural feature of the fragmented post-2003 political order. Power is contested among a handful of political parties and their affiliated armed groups, each of which dominates the budgetary allocations, employment, and contracting within one or more ministries. Quality of service is sacrificed for the sake of sustaining practices of graft that feed revenues into parties’ patronage networks. While such practices pervade all levels of the government in addition to private markets, corruption takes on distinct forms and comes with particularly high stakes in the healthcare sector. The unraveling of Iraq’s once renowned healthcare system due to US-led wars as well as UN sanctions has been well-documented in medical and social science studies but comparatively little attention has been paid to the ways in which systemic corruption – arguably the most corrosive and enduring legacy of these wars – presents uniquely damaging consequences in the healthcare sector.

This preliminary paper looks to the tragic phenomenon of mass-casualty hospital fires in Iraq’s COVID-19 wards to kickstart a larger policy-oriented conversation on the political drivers, key mechanisms, and human costs of corruption in the healthcare sector. The research is based on a literature review as well as qualitative interviews with Iraqi doctors (10), Iraqi government health officials (5), researchers and engineers specializing in hospital fire safety (3) and COVID-19 patients and their families (20) in both Federal Iraq and the Kurdish region (38 interviews total). Broadly speaking, the research contends that political parties in control of the healthcare system compromise the safety and efficacy of both public and private hospitals by systematically evading quality controls and maximizing profits from medical supply chains at all costs. 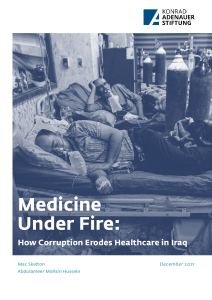