An analysis of the 2021 Syrian Presidential Elections and the context in which they took place.
2. Juli 2021 Bestellinformationen

The 2021 Syrian Presidential Elections have unanimously been described as a farce. It comes as no surprise that Assad stays in power for a 4th term, gaining 95% of votes. In an analysis of the legal, Syrian regional and international level, this paper sheds light on the many flaws, felonious procedures and violations of international law inherent in the presidential elections. Amongst others, the paper addresses the systematic exclusion of large parts of Syrian constituents, the regime’s deterrence of any real opposition, the lack of a safe voting environment, and therewith, on an international level, the neglect of the entire peace process that seeks a political and not a military solution to the conflict in Syria.

Looking into the near future of post-election Syria, the paper furthermore discusses what the elections mean for both Syrians and the Assad regime including possible strategies Assad might peruse to strengthen his power on a domestic and regional political level. Conclusively, a set of recommendations are provided regarding what the Syrian people may ask from the international community as a response to the 2021 Syrian Presidential Elections. 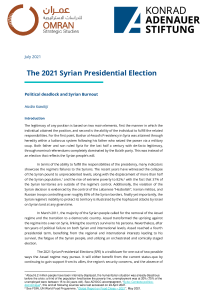