What about the Return of IDPs to Areas Controlled by the Syrian Government?

The Case of the Informal Settlement of Tadamun

More than a decade into the conflict in Syria more than 12 million people have been displaced. The Syrian regime’s claim in 2021 that millions have returned is far from reality. Myriam Ferrier analyzes the regime’s policies regarding the housing, land and property rights of people in Damascus’ neighborhood of Tadamun. She claims that legislations related to the removal of debris in damaged neighborhoods negatively impact the return of displaced people.
9. Juni 2022 Bestellinformationen

Of the 6,7 million internally displaced persons in Syria in 2022, 3,6 million were displaced in government-controlled areas, including 3 million in urban areas. Despite the relative stabilisation of regime-held territories and official declarations about the population’s return, IDPs face many obstacles in regaining their Housing, Land and Property rights (HLP), which are a condition for return and would be a step towards a durable solution. Most of them have been displaced for more than five years.

First, the publicity given to the preservation and reconstitution of property rights held in the cadastral registers (damaged or destroyed by the conflict) of the General Directorate of Cadastral Affairs (GDCA) masks the lack of action to reconstitute other registers, i.e. those held by the Ministries of Justice and Finance. The latter, as together with oral testimonies, are widely used to preserve property rights in informal settlements, where a significant proportion of displaced people originate from. By focusing their official statements on the GDCA, the authorities have effectively side-lined the Ministries of Justice and Finance from the process of securing property.

Second, a major obstacle to the return of IDPs is the requirement for security clearance, to access homes or obtain compensation. Instituted as early as 2012, obtaining such clearance depends not only on people not being involved with the opposition during the conflict, but also on their network and ability to obtain support for their application, given the risks involved and the time it takes. Vulnerable people, such as women, are particularly at risk.

Finally, the mechanism set to clear debris of damaged neighbourhoods before rehabilitation or reconstruction is not adapted to the return of displaced persons. Law 3/2018 on Debris Removal and Damage Compensation, adopted in parallel with Law 10/2018 on Urban Development, does not consider the HLP rights of displaced persons. Under this law, in line with the mechanism established by the Reconstruction Committee as early as 2012, governorate services assess damage and define buildings to be destroyed before urban development projects take place. Residents only have one month to file a claim for compensation and restitution. Although this time limit is common in Syrian urban law, the authorities refuse to consider the scale of population displacement and the ability of displaced people to gather the necessary ownership and civil status documents. This refusal especially violates the rights of IDPs from informal settlements and peri-urban areas.

Although the government recognises that alternative ownership documents exist, it did not implement a policy that would allow displaced people to obtain these. The claimants are left to carry the burden of providing proof and pay the cost of rubble removal. In addition, compensation payments have been suspended since 2016. The informal settlement Tadamun, where Law 3/2018 was first implemented in August 2018, shows how the residents' ability to secure HLP rights depends on social ties to security apparatus members. 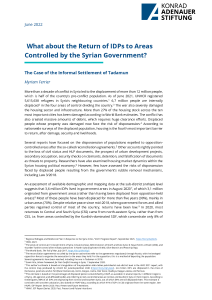 Myriam Ferrier - What about the Return of IDPs to Areas Controlled by the Syrian Government.pdf
Herunterladen
Kontakt