Konrad Adenauer was born on January 5, 1876, in Cologne. His father, Konrad sr., was a clerical civil servant, and his mother, née Helene Scharfenberg, had also been brought up in a civil servant's family. Together with three siblings, two elder brothers and one younger sister, Konrad Adenauer grew up in modest circumstances. At his grammar school, the Apostelgymnasium, he was thought a 'good, unspectacular, average pupil'. After his graduation in 1894, he began work as a bank apprentice but abandoned his apprenticeship when he was awarded a grant by the City of Cologne that enabled him to begin studying law at Freiburg University. Having spent two semesters at Munich, where he also attended classes in national economics, he moved to Bonn, where he passed his first state examination with fair success in 1897. The second state examination he passed with adequate marks in Berlin in 1901. Having spent his allotted time as a junior official at the office of the Public Prosecutor attached to the Cologne Regional Court, he joined in 1902 a law firm in Cologne headed by councillor Hermann Kausen who was Chairman of the Centre party group in the city council.

It was a foregone conclusion that Adenauer, a Catholic from the Rhineland, was predestined by both his origin and his upbringing to join the Centre Party, the party of political Catholicism. His political career began after he married in 1904 Emma Weyer, the twenty-four-year-old daughter of a respectable, prosperous Cologne family. By virtue of this marriage, he was brought into contact with the societal and political trendsetters among the burghers of the Rhineland. In 1906, he applied successfully for the career city councillor post. Three years later, he was elected President of the council, which automatically made him deputy of Max Wallraff, the then Lord Mayor, who was an uncle of Adenauer's wife. It was particularly during the First World War that Konrad Adenauer's deftness and imagination stood him in good stead in organising the food supply of the City of Cologne. His professional success, however, was overshadowed by fateful events in his personal life. In 1916, he lost his wife, who had borne him three children. Adenauer himself was involved in a severe car crash in which he suffered facial injuries that held him captive for months in hospital and later in a health resort. When Wallraff left for Berlin in 1917 to become Under-Secretary of State for Interior Affairs, he left the office of Lord Mayor of Cologne vacant, and Adenauer was appointed his successor by the unanimous vote of all members of the City Council. This election made him the youngest mayor in Prussia.

In the time of the Weimar Republic, Adenauer was one of the most influential political personages in Germany. He made his name by progressively developing Cologne into a 'metropolis of the West'. During his term of office, Cologne University was founded in 1919, the city's former fortifications were converted into a green belt, the traditional industrial exhibition was revived, port facilities on the Rhine river were extended, another bridge across the Rhine was built, and industrial enterprises, the Ford Company among them, were induced to settle within the municipality. In 'big politics', Adenauer became one of the key figures dominating the Rhineland question. To prevent the outright annexation of the occupied area on the left bank, he advocated for a time the creation of a Rhenish Federal State so as to appease the French in their need for safety. That he cooperated with the so-called Rhineland Movement gave him the reputation of being a 'separatist', particularly during the Nazi period.

His influence spread beyond regional boundaries when he was made President of the Prussian State Council in 1921, an office which he held until 1933. Repeatedly, he was mentioned in government circles as one of the candidates for the office of Chancellor in the periodic crises of the Weimar Republic. In conjunction with his fundamental federalist, Christian, and social convictions, his republicanism made him an object of hate among the adversaries of the Weimar 'system'. When the Nazis came to power in 1933, therefore, he was immediately replaced as Lord Mayor of Cologne and banished from the city of his birth.

Adenauer lived through the years of war and National Socialist tyranny together with his family in the house on the Zennigsweg in Rhöndorf which he had built after the financial claims he had against the municipality of Cologne had been settled out of court. His situation became somewhat hazardous when, by the end of the war, he was held prisoner by the Gestapo for several months as an enemy of the regime after the assassination attempt on Hitler had failed.

He was returned to the office of Lord Mayor of Cologne by the victorious Americans. Aged 69, Adenauer was then at the head of a list of personally untainted politicians. With unbroken strength he faced up to the task of reviving a city that had been largely ruined. After a very few months, and after a switch of control, he was dismissed from office by the British military government then in charge after he had criticised its occupation policy. For the second time in his life, Adenauer found himself compelled to retire and expelled from Cologne. The ban on political activity, which had been imposed at the same time, had barely been lifted when Adenauer, who by then was 70, focussed all his energies on his activities within the CDU, which he had joined shortly after its foundation. A number of political concepts and programmatical ideas which he had developed after the First World War and submitted to the test of his experiences during the rule of the Nazis laid the foundations for a 'lightning career' in his party. As early as February 5, 1946, Adenauer was elected Chairman of the Rhineland CDU and - a scant month later - Chairman of the CDU of the British Zone. By october, he had added the office of Chairman of the CDU party group in the North Rhine-Westphalian Parliament to his list of offices. His rise as the charismatic Chancellor who was in office when the Federal Republic of Germany was founded and the respect he enjoyed as a statesman of the Western World are closely related to the origins of the conflict between East and West and the beginnings of the Cold War.

He took his most important step on his way to the top of the nascent West German governmental system when he was elected President of the Parliamentary Council created at the instruction of the three Western Allied Powers in 1948 to formulate the Basic Law of the Federal Republic of Germany. It was in this position that he became the 'spokesman of the budding Federal Republic' (Heuss) in its contacts with both the Land Minister Presidents and the military governors, which brought him increasing fame among the general public. At the age of 73, he was elected Federal Chancellor by the CDU/CSU party group in the first German Federal Diet on September 15, 1949, an office which he was destined to hold for 14 years.

The governments he led prepared the ground for the successful construction of a new democracy. Some epoch-making decisions will remain connected to the 'Adenauer era' forever. In foreign politics, these include the achievement of national sovereignty, the establishment of close ties with the free West, the reconciliation of France, and the unification of Europe; in domestic policy, they include the integration of refugees and displaced persons as well as the construction of social market economy, a novel economic order amalgamating the promotion of free competition with the responsibility of social government. The 'economic miracle' of Germany could not have been brought about without secure social peace in the country. Legislation establishing co-determination in the coal and steel industry, the system of employee property formation, the equalisation of burdens, the creation of subsidised housing, child benefits, the agricultural Green Plan, and the dynamisation of pensions became the cornerstones of the much-famed social network of the Federal Republic of Germany. For the first time, social policy in Germany acquired permanent and coherent structural overtones.

At the general elections of 1957, the CDU/CSU headed by Adenauer won an absolute majority of 50.2% of the votes cast - an achievement that is probably unique. When Adenauer's third period of office as Chancellor ended, however, uncertainties had become preponderant. The general picture of global politics had changed after the United States had modified its priorities, and this, in turn, caused the Soviets to bring more pressure to bear on Berlin (Berlin ultimatum; three-state theory). Domestic politics, in turn, succumbed to the struggle for the 'old man's' succession. One historical feat at the time was the establishment of close political ties between Germany and France on the strength of the friendship between Adenauer and de Gaulle, who had met for the first time in 1958. On the other hand, political relations between the two German entities reached an all-time low. The construction of the Berlin Wall on August 13, 1961, just a few weeks before the fourth general elections, seemed to be cementing the separation of Germany. Having been elected Chancellor once again by a coalition of CDU/CSU and FDP in 1961, Adenauer stepped down at the half-way mark of the legislative period in conformance with a previous agreement.

Konrad Adenauer's attraction waned as the war generation was replaced by the children of the reconstruction period. In 1966, he resigned as Federal Chairman of the CDU. For the last time, he achieved political success in 1963 when the Franco-German Treaty was signed, a treaty which not only focussed on cooperation between the two neighbouring states but pointed the way to Europe, one of the overriding goals of Adenauer's policy.

When he died aged 91 on April 19, 1967, he received worldwide honours as a statesman who gave freedom, prosperity, and social security to the citizens of the Federal Republic. Konrad Adenauer lies buried in Rhöndorf. A foundation has directed the conversion of his house into a museum and research institution. His memoirs, the first volume of which appeared in 1965, and an edited version of his correspondence represent historical source materials of the first order. 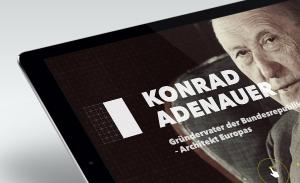 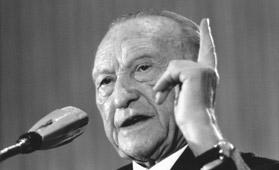