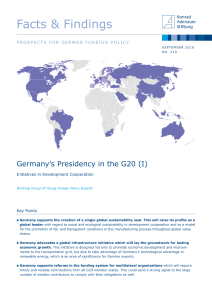 Germany’s Presidency in the G20 (I)

In December 2016, Germany will take over the presidency of the G-20.In this and two other papers, Konrad-Adenauer-Stiftung’s Working Group of Young Foreign Policy Experts makes proposals as to the points which the German government should focus on, as well as ideas for resolving global problems which should be pursued within the G20. In this way, the young foreign policy experts will be helping to shape Germany’s international responsibility in a concrete way. This first paper is about sustainable development policy. 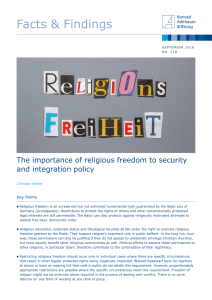 The importance of religious freedom to security and integration policy

This analysis will focus on the importance of religious freedom with regard to issues of security and integration. 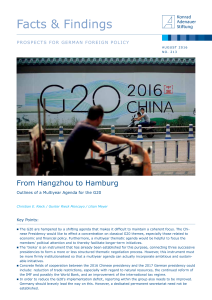 From Hangzhou to Hamburg

Outlines of a Multiyear Agenda for the G20

The G20 are hampered by a shifting agenda that makes it difficult to maintain a coherent focus. The Chinese Presidency would like to effect a concentration on classical G20 themes, especially those related to economic and financial policy. Furthermore, a multiyear thematic agenda would be helpful to focus the members’ political attention and to thereby facilitate longer-term initiatives. This document shows possible starting points of a collaboration between the 2016 Chinese presidency and the following German presidency in 2017. 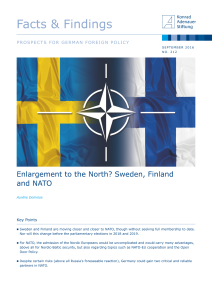 Enlargement to the North? Sweden, Finland

Sweden and Finland are moving closer and closer to NATO, though without seeking full membership to date. Nor will this change before the parliamentary elections in 2018 and 2019. For NATO, the admission of the Nordic Europeans would be uncomplicated and would carry many advantages, above all for Nordic-Baltic security, but also regarding topics such as NATO-EU cooperation and the Open Door Policy. Despite certain risks (above all Russia’s foreseeable reaction), Germany could gain two critical and reliable partners in NATO. 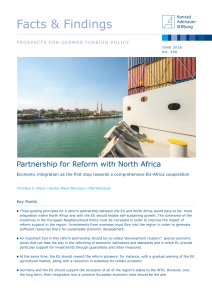 Partnership for Reform with North Africa

A reactivation and a rearrangement of the relations between Africa and the EU are eagerly required. In addition to an intensification of the political dialogue it is essential to strengthen a long-term economic resilience of the region first. In order to achieve the intended purpose a reform partnership with North Africa - which is, from the European point of view, the most important joint to Sub-Saharan Africa as to economic, migration and security policy matters - needs primarily to be striven for. 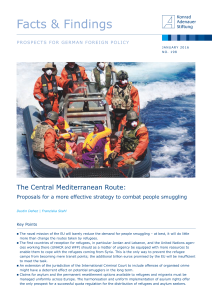 Proposals for a more effective strategy to combat people smuggling

The movement of refugees across the Mediterranean will remain at its current high level in the coming years. A military mission of the European Union will only marginally reduce people smuggling across the Mediterranean because it fails to address the demand for such smuggling. Any move to tackle the causes of refugee movements requires the strengthening of the weak states involved. 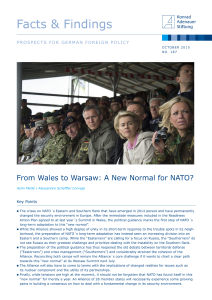 From Wales to Warsaw: A New Normal for NATO?

The crises on NATO´s Eastern and Southern flank persist and have permanently changed the security environment in Europe. After the immediate measures included in the Readiness Action Plan agreed to at last year´s Summit in Wales, the political guidance marks the first step of NATO´s long-term adaptation to this “new normal”.The preparation of the political guidance has reopened the old debate between territorial defense (“Easterners”) and crisis management (“Southerners”) and considerably strained the cohesion of the Alliance. 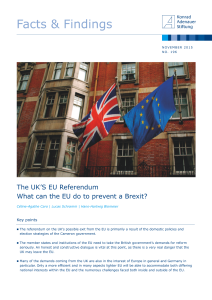 The UK’S EU Referendum - What can the EU do to prevent a Brexit?

The referendum on the UK’s possible exit from the EU is primarily a result of the domestic policies and election strategies of the Cameron government. The member states and institutions of the EU need to take the British government’s demands for reform seriously. An honest and constructive dialogue is vital at this point, as there is a very real danger that the UK may leave the EU. 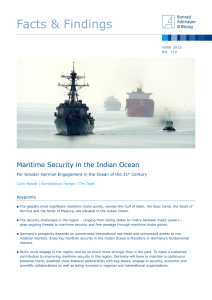 Maritime Security in the Indian Ocean

For Greater German Engagement in the Ocean of the 21st Century

The globally most significant maritime choke points, namely the Gulf of Aden, the Suez Canal, the Strait of Hormuz and the Strait of Malacca, are situated in the Indian Ocean. The security challenges in the region – ranging from failing states to rivalry between major powers – pose ongoing threats to maritime security and free passage through maritime choke points. Germany’s prosperity depends on unrestricted international sea trade and unimpeded access to raw material markets. Ensuring maritime security in the Indian Ocean is therefore in Germany’s fundamental interest. 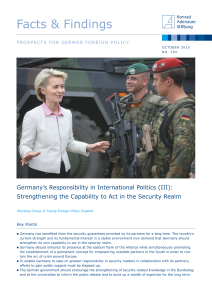 Strengthening the Capability to Act in the Security Realm