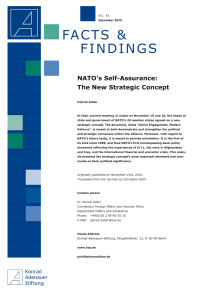 At their summit meeting in Lisbon in November 2010, the heads of state and government of NATO’s 28 member states agreed on a new strategic concept. The document, titled “Active Engagement, Modern Defence”, is meant to both demonstrate and strengthen the political and strategic consensus within the Alliance. It is the first of its kind since 1999, and thus NATO’s first encompassing basic policy document reflecting the experiences of 9/11 and the wars in Afghanistan and Iraq. This analysis presents the strategic concept’s most important elements and comments on their political significance. 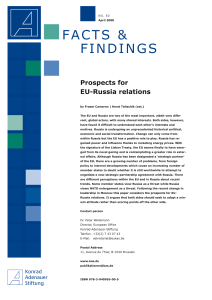 The EU and Russia are two of the most important, albeit very different, global actors, with many shared interests. Both sides, however, have found it difficult to understand each other’s interests and motives. Following the recent change in leadership in Moscow this paper considers the prospects for EU-Russia relations. It argues that both sides should seek to adopt a win-win attitude rather than scoring points off the other side. 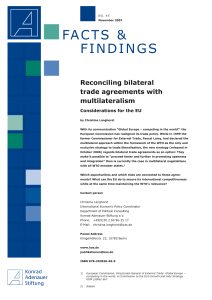 With its communication “Global Europe – competing in the world” the European Commission has realigned its trade policy. While in 1999 the former Commissioner for External Trade, Pascal Lamy, had declared the multilateral approach within the framework of the WTO as the only and exclusive strategy to trade liberalisation, the new strategy (released in October 2006) regards bilateral trade agreements as an option. Which opportunities and which risks are connected to these agreements? 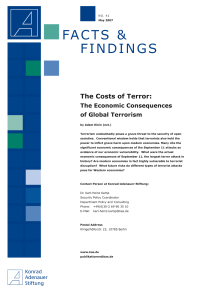 The Costs of Terror - The Economic Consequences of Global Terrorism

Terrorism undoubtedly poses a grave threat to the security of open societies. Conventional wisdom holds that terrorists also hold the power to inflict grave harm upon modern economies. Many cite the significant economic consequences of the September 11 attacks as evidence of our economic vulnerability. What were the actualeconomic consequences of September 11, the largest terror attack in history? Are modern economies in fact highly vulnerable to terrorist disruption? What future risks do different types of terrorist attacks pose for Western economies? 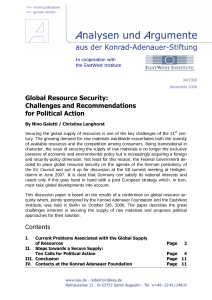 This discussion paper is based on the results of a conference on global resource security which, jointly sponsored by the Konrad Adenauer Foundation and the EastWest Institute, was held in Berlin on October 5/6, 2006. The paper describes the great challenges inherent in securing the supply of raw materials and proposes political approaches for their solution. 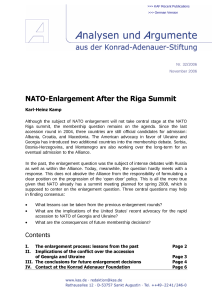 NATO Enlargement After the Riga Summit

Although the subject of NATO enlargement will not take central stage at the NATORiga summit, the membership question remains on the agenda. Since the lastaccession round in 2004, three countries are still official candidates for admission:Albania, Croatia, and Macedonia. The American advocacy in favor of Ukraine andGeorgia has introduced two additional countries into the membership debate. Three central questions may help in finding consensus. 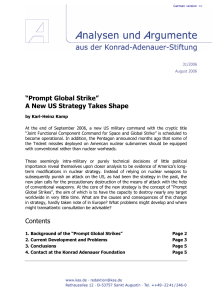 At the core of the new strategy is the concept of “PromptGlobal Strikes”, the aim of which is to have the capacity to destroy nearly any target worldwide in very little time. What are the causes and consequences of this change in strategy, hardly taken note of in Europe? What problems might develop and where might transatlantic consultation be advisable? 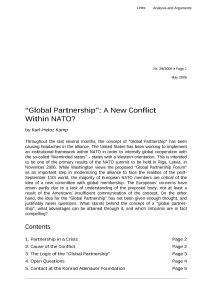 Throughout the last several months, the concept of “Global Partnership” has beencausing headaches in the alliance. The United States has been working to implementan institutional framework within NATO in order to intensify global cooperation withthe so-called “likeminded states” – states with a Western orientation. This is intendedto be one of the primary results of the NATO summit to be held in Riga, Latvia, inNovember 2006. While Washington views the proposed “Global Partnership Forum”as an important step in modernizing the alliance to face the realities of the post-September 11th world, the majority of European NATO members are critical of theidea of a new committee with global membership. The Europeans’ concerns havearisen partly due to a lack of understanding of the proposed body, not at least aresult of the Americans’ insufficient communication of the concept. On the otherhand, the idea for the “Global Partnership” has not been given enough thought, andjustifiably raises questions. What stands behind the concept of a “global partnership”,what advantages can be attained through it, and which criticisms are in factcompelling? 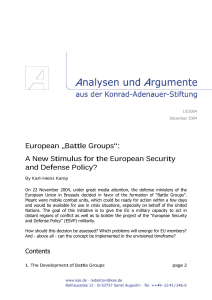 European „Battle Groups“: A New Stimulus for the European Security and Defense Policy? 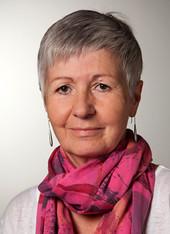