Interview: Promoting European values and standards in the media

The cooperation of the KAS Media Program South East Europe with media and political representatives in South East Europe was the main topic of an interview with Christian Spahr, Head of the Media Program. It was conducted by the student Michelle Trimborn as part of her master thesis at the European University Viadrina (Frankfurt / Oder).

"We risk deluding ourselves if we think that the German experience can directly be transferred to other countries," stated Spahr. "Our main tasks are to draw attention to the need for development in the media sector and to enhance the public debate about it." He explained that the main objective is to foster dialogue among journalists, media owners, politicians and independent experts.

"For us it is important not only to transfer information and know-how from Germany to South East Europe, but also to reinforce the exchange of best practices between South East European countries," stressed Spahr.

The KAS Media Program South East Europe offers events not only for media representatives, but also for communication experts of political parties.

The whole interview is available here. 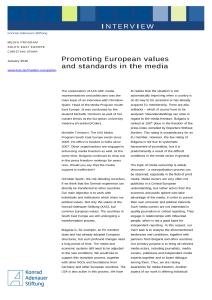