The announcement of UN-brokered permanent ceasefire in Geneva and political talks in Tunisia has given renewed optimism that Libya’s elusive peace attempts are yet again within close grasp. Despite several high-profile international attempts in Moscow and Berlin (January, 2020) to broker a ceasefire and restart the political process, the battle in Libya not only resumed, but intensified, culminating in all-out war before reaching a stalemate in June, 2020. The conflict was sparked on April 4th, 2019, when self-styled leader of the Libyan Arab Armed Forces (LAAF) Khalifa Haftar launched an attack on Tripoli to overthrow the internationally recognised UN-backed Government of National Accord (GNA). The role of regional and international powers in support of both factions during the war has further entrenched positions, and added to the intractability of the conflict.
October 30, 2020 Ordering Information 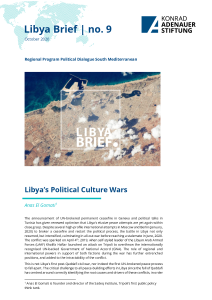