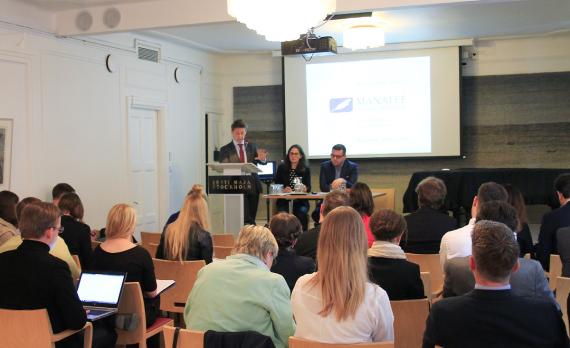 The participants engaged in vivid debates with their partners from all Baltic and Nordic states about current foreign and security policy challenges of the region. They discussed the changed security policy situation with regard to Russia’s revisionist foreign policy, the Arctic challenges, energy security in the region, the Nordic-Baltic EU perspective, the different answers to the migration crisis and the rise of populist parties. In contrast to the conferences before, for example Italy in 2015 or Russia in 2014, it was not only focused on bilateral relations, but rather on the whole region, which is under strong tensions since Moscow’s illegal annexation of Crimea and the war in Eastern Ukraine.

Especially the relations between Russia and the West – although not explicitly subject of one of the panels – were an evident theme connecting all debates. The participants did not agree on how to deal with a revisionist Russia, but they came to the conclusion that Russian foreign policy is actually driven by domestic considerations and that it is likely that the Kremlin started an international crisis to avoid a domestic one.

The Artic is already a point of major international interest today. As temperatures rise and the ice melts, the High North transforms into a strategic region of the world. Experts expect to have open and ice-free shipping routes starting around 2030, which will change world trade routes dramatically. Access to natural resources will be possible even earlier, expecting major oil and natural gas fields to be explored. Most participants agreed that cooperation between neighboring states is more likely than conflict. Even though the deterioration of the relations between Russia and the West affects cooperation in the Arctic region, a major conflict is unlikely because of the regulation by the UNCLOS and the Arctic Council as well as the need of technological cooperation in order to explore the resources.

With regards to energy security as well as the dependence of the EU on Russian gas – Russia supplies 30 percent of EU gas – the debate focused mainly on the planned Nord Stream 2 pipeline and whether Russia uses gas as political means of pressure. The German participants described the relations between Russia and the European countries as a relationship of mutual interdependence. Even though Russia likes to pretend it does not need Europe, its gas fields are so close to Europe that exports to another partner – namely China – are not a real alternative. In contrast to this, the Nordic and Baltic participants argued that the Kremlin is not shy to use gas as well as its infrastructure and pipelines as political weapon. The participants agreed that Nord Stream 2 should be scrapped as it sends the wrong political message, in particular with regards to European allies such as Poland. Instead, more investment in LNG (liquefied natural gas) terminals is recommended.

Another difference in the perception between Nordic, Baltic and German participants was discussed with regards to the EU: Can we describe the Baltic states as one coherent region? The German participants favored a rather differentiated view and stressed the heterogeneous priorities with regard to current political developments (for example the refugee crisis). In contrast the participants from the region stressed that it made sense to talk about the Nordic-Baltic region as a whole as countries share many interests and engage in substantive exchange, such as regular ministerial meetings.

With regard to the most pressing challenges the participants also engaged in a lively debate about the refugee and migration crisis. Specifically, participants from Germany and Sweden – as the biggest host countries in the EU – talked about the experiences with refugees in their countries. The debate was mostly about integration of migrants into the society. The Swedish view on Germany, which welcomed the German leadership role last autumn, changed decidedly with the consequences of the refugee crisis being felt.

Another topic that sparked a debate between the participants was the rise of populist parties in the Nordic States but also in Germany with the “Alternative für Deutschland”. The participants agreed on the fact that there is no uniform right-wing ideology in Europe – the parties’ stances were too different on issues such as the role of the United States, of NATO, the EU or of other international organizations. However, they all have nationalist and populist elements in their right-wing ideology such as stigmatizing „the Others”: foreigners and outsiders not belonging to the national Volksgemeinschaft within which everybody was equal and of equal rights. On top of that, populism is not merely a phenomenon of the political fringes. The participants saw populist tendencies in the political mainstream as well. The question of how to deal with populist parties was debated vividly. But strategies against the rise of right-wing populists are still hard to find: tabooing them was counterproductive at approval ratings of up to 20 percent. It was contested whether populist parties should be invited into coalition governments to force them to adapt their nationalist and populist discourse to the realities of democratic consensus building and practical problem-solving.

Besides the different panels, the program included some background briefings, for example with the German ambassador to Sweden, Mr. Michael Bock. Throughout the intense two-day conference the participants gained insight into the national discourses about the current foreign and security challenges. Even though the perceptions of Nordic, Baltic and German participants differentiated on some topics, it can be stated that all in all there exists mostly common ground with regard to the current foreign and security policy challenges and what needs to be done in order to meet these challenges.