Ongoing conflict in Yemen: how can the media play a more constructive role?

Yemeni and international participants of the three-day workshop held in Amman, Jordan, 7-9 December 2014, quickly agreed: media in the Republic of Yemen are currently part of the problem, not of the solution.
December 14, 2014 Ordering Information 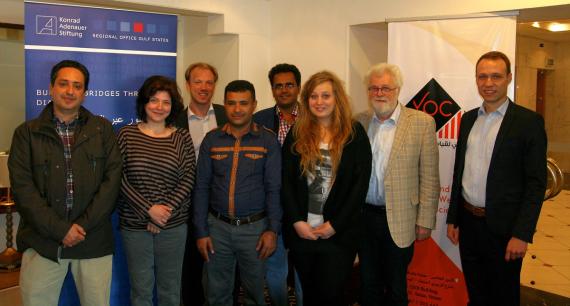 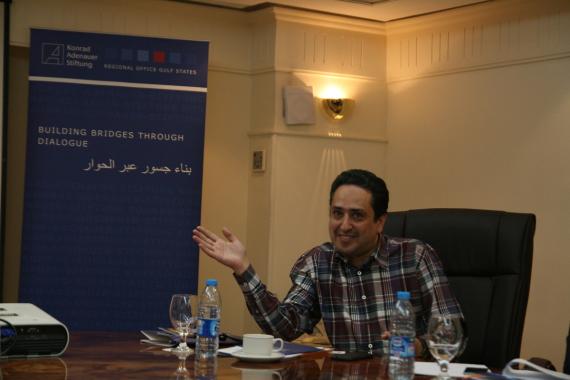 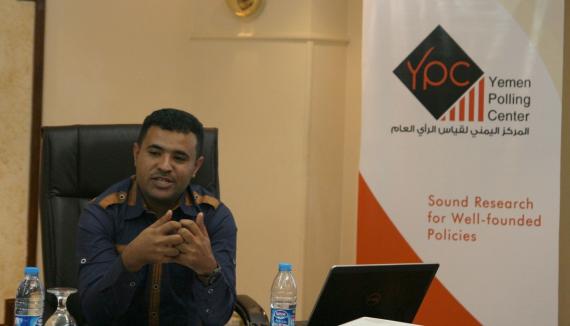 RPG KAS
Taha Yaseen speaks on the role of media in times of political upheaval in Yemen. 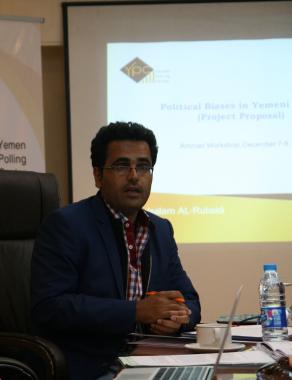 RPG KAS
The two media experts Ildiko Kaposi and Jan Keulen give content-based and conceptual feedback to the team from the Yemen Polling Center.

A younger generation of reformers, traditional elites, tribes, religious groups who feel disadvantaged, and al-Qaeda in the Arabian Peninsula combat each other in the crisis-ridden country. Yemeni experts claim that most media have lost their independence and take the side of individual players. The human right to have credible information is not respected anymore.

Since most media outlets in Yemen are affiliated with political elites, reporting is often misused by these influential actors pursuing their own political and economic agendas. Next to the armed conflict taking place in the streets of Sana’a, Aden or Mukalla, media have become an additional, proxy battlefield for severe political conflict. By discrediting the enemies of and recruiting support for their patrons, they contribute to an escalation of violence.

Against this background, KAS Regional Office Gulf States and the Yemen Polling Center jointly organised a workshop to kick-off a research project on partisanship and bias in Yemeni media. The findings are intended to be published in a consumer guide for the national and international audience of Yemeni media. This tool aims first and foremost to promote media literacy among the Yemeni people. Furthermore, it may provide journalists, decision makers and researchers with an overview of the numerous media outlets and their respective affiliations. Thereby Konrad-Adenauer-Stiftung and the Yemen Polling Center aim to contribute to a more independent and variegated media landscape in Yemen.

Given the rapid increase of media outlets since the beginning of the upheavals in Yemen in 2011 (e.g. while in 1991 there were merely 93 newspapers, today there are up to 429), consumers have difficulties to identify biased reporting and to get an objective and truthful idea of their country’s current situation. While investigative reporting seems to be a matter of the past, making rumours circulate is prevailing: the country’s political forces use media to blame each other for the precarious political situation in Yemen. The three main competing blocs in Yemeni media are led by individual players, ruled by political parties and controlled by the State. State-run media are currently supervised by Houthi rebels who enjoy legitimacy in this regard, since people are aware of the fact that media, in the past, significantly contributed to the political problems Yemen is now facing.

The planned study will be based on a discourse analysis. Language and terminology used by relevant media on important national occasions during Yemen’s transitional period will be analysed to this end. Relevant key events which the researchers will take into consideration are the signing of the GCC Initiative on 23 November 2011, which handed over presidential powers to Vice President Hadi and marked the beginning of Yemen’s transition process, Yemen’s military restructuring in August 2012, the beginning of the National Dialogue in March 2013 and Sana’a’s take-over by the Houthi rebels in September 2014.

Concluding the workshop, the participants focused on methodological aspects and the theoretical framework for their research project. The workshop committee intends to meet again, once the study has taken shape within the next three months, thanks to the Yemeni partners’ fieldwork, in order to discuss progresses and further steps to come. 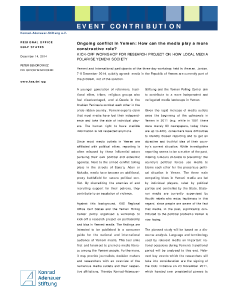 Ongoing conflict in Yemen_ how can the media play a more constructive role? (Pdf)
Download