The aim of the Workshop “Restart youth employment” was to propose measures to foster youth employment and to discuss the circumstances of an improvement process and the role of responsible persons and bodies.
October 15, 2013 Ordering Information 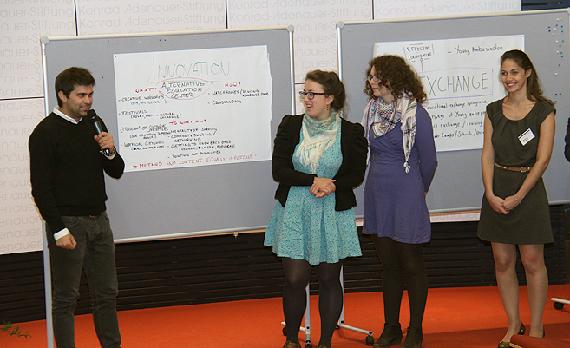 At the end, the young people represented there results at the forum. 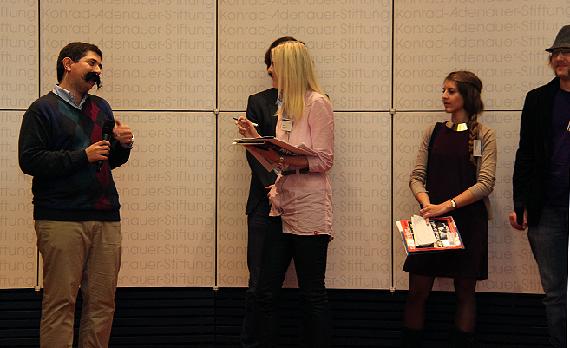 KAS
As a solution, it was suggested that Europeans should be encouraged to read several newspapers and compare their content, to create more positive news. 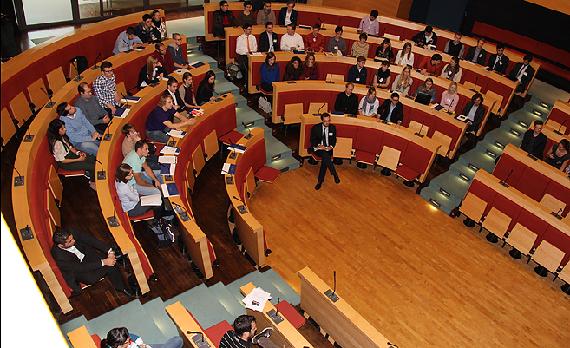 It seemed that all participants were able to draw a lot from the workshop.

The participants set themselves the goal to respond to the following main questions:

At the beginning of the workshop, the moderator Jana Hauschild invited the participants to rearrange the seats in a circle, to facilitate the discussion. Initially each participant had the opportunity to introduce himself and the first instances of the workshop revealed that the group was very heterogenic: the participants from different German and Greek regions were mainly students and graduates of law, political science and economics, or young professionals, interested in social, political and geographical topics. They have different expectations and goals, but one could notice the present uncertainty and the fear towards the own future and career perspectives concerning the current youth employment situation.

The first phase of the workshop consisted mainly of two speeches from different perspectives. The first speech from the political perspective was held by Mark Hauptmann MP, Chairman of the International Commission for Foreign Affairs. The entrepreneurial view was presented by Apostolos Apostolakis, successful Co-Founder of many companies, such as e-shop.gr.

Mark Hauptmann highlighted the relevance of youth projects and collaborations and underlined the significant differences between Germany and Greece, presenting seven interesting points about the circumstances and the origin of youth unemployment.

Apostolos Apostolakis inspired the young participants with his successful entrepreneurial experience and encouraged them to realize their big chance, which is in the growing number of Greek startups with global perspectives.

He also related to the fact that there are many ways to fund startups and, recognizing the risk of such entrepreneurship, he concluded, that joining or starting a startup may be risky, but it is an opportunity not only to ameliorate the personal situation, but also to respond to the market needs.

Differences and similarities of Germany and Greece

On the second day of the workshop the moderator encouraged the participants to build four groups to exchange impressions and experiences, to pose questions and discover possible differences and similarities of the two states, Germany and Greece. The members had to circulate around the different groups with the purpose of switching dialogue-partners. After this phase of exchange, the members of the groups presented summarized results of the dialogues, focusing on education structures, the role of the private sector, the development of new branches, and the tendency towards racism and nationalism.

In the successive phase of the workshop, Jana Hauschild handed out papers, on which the participants wrote down their own ideas, measures and concepts to enhance the current youth employment situation. After a short break for reflection, the main common points emerged, bundled under the main point “growth-oriented-reform”:

Ways and obstacles of implementation

Even if all participants agreed on the relevance of each task, they discussed lively about ways and obstacles of implementation. During the concluding and closing phase of the workshop, in order to present the results of the workshop to the other congress-participants, the workshop-members selected and elaborated the three most important tasks:

Recapitulating, the participants had different points of view and approaches toward the current crisis: the notions of change-implementation and the opinions about active responsible actors were highly differing. But finally, everybody highlighted the importance of German - Greek exchanges, enabled also through meetings such as the German-Greek Congress, which bring together people with a common matter: The joint search of solutions of pressing problems in the European Union.