"Innovative approaches to overcome urban inequality" was the theme of this year's international Strong Cities 2030 conference, hosted by the Konrad-Adenauer-Stiftung (KAS) in partnership with the City of Johannes-burg, that took place from 13-15 October 2019 in Johannesburg, South Africa.
October 30, 2019 Ordering Information

The aim of the new KAS initiative "Strong Cities 2030", which was launched last year at a conference in Essen, Germany is to develop a global network of local policy makers and urban development practitioners in order to promote international collaboration and to assist cities in becoming more sustainable according to the targets set out by the United Nations Sustainable Development Goals.

Rapid urbanisation, especially in Africa and Asia poses enormous challenges for local governments. Growing inequality, including spatial, social, economic and political inequality, is a challenge that many cities in Africa, Asia, Latin America but also in Europe and the U.S. are faced with.

In South Africa, the most unequal country in the world, the legacy of Apartheid continues to impact on people’s lives and economic opportunities. In order to introduce the conference delegates to the stark visible contrasts that shape the City of Johannesburg and provide them with information about the City’s history, the first conference day included a guided tour to the South-Western Township, commonly referred to as "Soweto", which is one of the oldest township in Johannesburg bordering the mining belt. Participants experienced first-hand that spatial inequality is a typical feature of South African cities, where affluent suburbs with tree lined roads, good infrastructure and upmarket shopping malls are a stone throw away from dusty townships and overpopulated informal settlements. While the City of Johannesburg under the leadership of Mayor Herman Mashaba is working hard to improve the living conditions of residents and make Johannesburg a city that works for all, the legacy of Apartheid still has a major impact on people's access to housing, health services, a good education as well as jobs and life chances.


Strong link between Inequality and Mobility

The tour to Soweto also demonstrated that Inequality is very much linked to Public Transport and Mobility, which affect resident’s access to jobs, good health care services and schools as well as recreational spaces.

Conference delegates therefore had to use different modes of transport, such as bus, mini taxi and the modern Gautrain, a rapid transit railway system in order to get a better understanding of the various available means of public transport, the pros and cons of the respective transport options as well as the costs involved.

The personal impressions and new insights that the delegates gained from the tour were discussed the following conference day and provided a good starting point to unpack the themes “Urban Inequality” as well as “Sustainable Mobility” further.

Mobility Case Studies from the Cities of Graz, Melbourne, Houston, Aachen and Singapore explored various solutions that cities around the globe have developed to deal with their specific mobility challenges. While these solutions might not fit exactly the needs of another city, these case studies can be used as an inspiration, reference point and source of expertise.

After the presentations of case studies, Siphelele Ngobese, researcher at the South African Cities Network emphasised the need for spatial transformation in order to drive inclusive economic growth. She highlighted the fact that more than two decades after Apartheid, the majority of urban dwellers in South African Cities are still socially, spatially, culturally and economically excluded. A major challenge for South African cities to fast track spatial transformation is the funding gap of between 10% and 38% of their capital expenditure. Unless this gap is closed, so Ngobese, metros will not be able to meet their core mandates.

Dr King Wang Poon, Director of the Lee Kuan Yew Centre for Innovative Cities, University of Technology and Design in Singapore focused in his presentation on the topic “Digitalization” and the potential opportunities that new technologies have to promote inclusive economic growth. While these technologies will cause changes in the job market that might be experienced as disruptive and even destructive, governments need to prepare for them in order to be able to make use of the new opportunities that arise.


Designing and creating a sustainable City

On the last day of the conference participants were tasked to jointly design and build a sustainable 3-D City with different materials. The participants were grouped in teams of ca. 8 people and were given certain criteria that their city had to fulfil. While this exercise was rather playful and creative, it initiated serious discussions within the respective teams and led to an intensive exchange of ideas and expertise amongst the delegates. At the end of the session each team had to present their City and explain the rationale for building it the way they did.

In the final conference session participants had the opportunity to suggest urban sustainability projects that they would like to continue working on in collaboration with other participants in the upcoming months. Fifteen projects in total were identified, ranging from a project idea that aims to explore new forms of public participation in decision making processes to the use of urban public spaces for educational purposes.


Building of trust as the foundation for future collaboration

The conference ended with a reception by Herman Mashaba, Mayor of the City of Johannesburg in the City Council Chambers in Braamfontein. Mayor Mashaba endorsed the Strong City 2030 initiative and elaborated on the many challenges the City of Johannesburg is currently facing. Stefan Evers, Member of the Berliner Abgeordnetenhaus (CDU) brought in the German perspective by sharing his insights of how the once divided City of Berlin has managed to overcome some of the spatial, economic and social divisions and inequalities after the fall of the Berlin wall.

With its initiative "Strong Cities 2030", KAS responds to the need to strengthen the capacity and political will within metropolitan governments and city administrations to implement the SDGs and pursue a sustainable development path. Given the complex context in which cities in a globalized environment operate today, such kinds of international platforms for policy dialogue and exchanges of experiences and best practices have become more critical. The second Strong Cities 2030 Conference in Johannesburg provided a unique opportunity for delegates around the globe to connect, network, exchange expertise and ideas with their international peers and hence build relationships and trust that are the foundation for future collaboration. 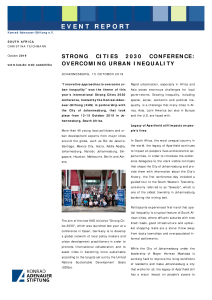